The Climate Change Deal We Cannot Live Without


Just what does all this squabbling about greenhouse gas emissions really mean? What has to go into an effective climate change agreement?  What factors are in play?

Here, courtesy of Vox.com, are a few charts that reveal a climate deal is both urgently needed and extremely difficult to craft.

First up, where we stand today.  Annex B countries are the wealthy nations that participated in the Kyoto Accords.  Non-Annex B countries, the poor nations and the emerging economic superpowers, now account for the lion's share of global emissions. 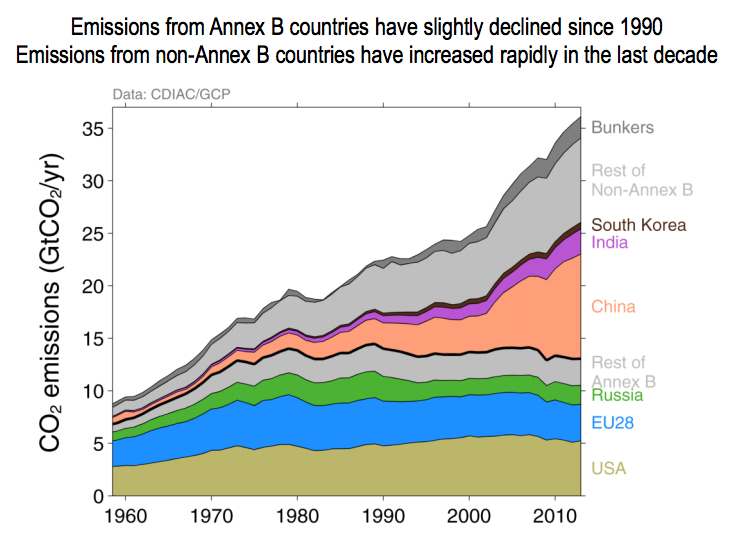 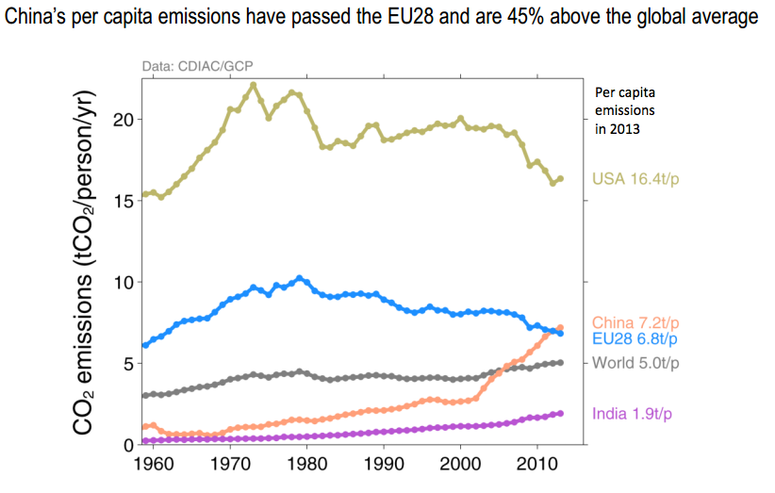 Emissions records, however, can be misleading.  While China is an easy target for criticism, it fires back that most of its emissions result from "outsourcing" of Western production.  Attribute those emissions back to the land of WalMart and you more than offset our supposed emissions cuts. 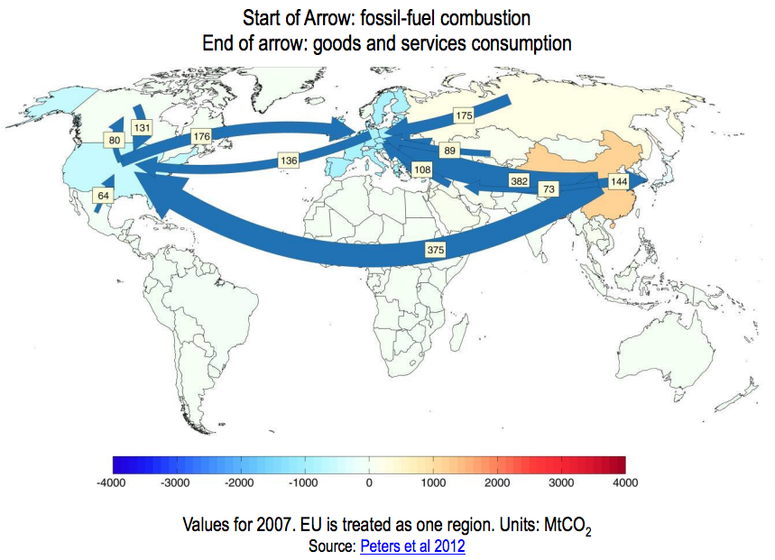 The thing is, we don't really have the luxury of time to squabble about who is responsible for what.  Without a regime of substantial, global emissions cuts we're on course to exhaust our total carbon budget by 2045.  Once there we can kiss goodbye any reasonable hope of keeping global warming within the 2C cap. 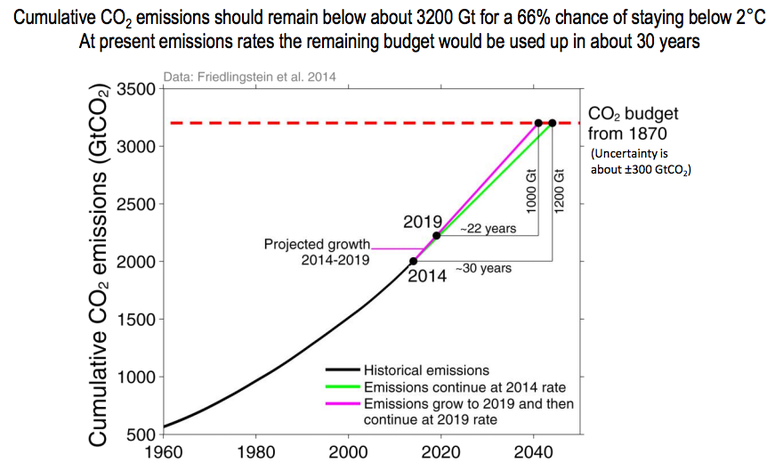 Yet, here's where it gets tricky.  We have accurate figures on the amount of atmospheric greenhouse gases already emitted.  We have accurate figures on the total amount of greenhouse gases we can emit into the atmosphere before we blow through the 2C target. There are only a few ways to stay within that target and that's going to mean sacrifice with some advantaged countries called upon to make the greatest cuts. 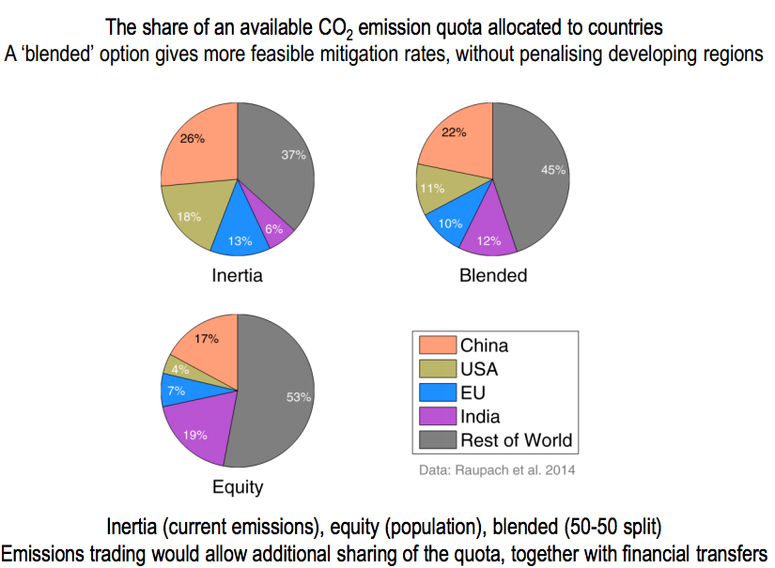 The western world's current share of emissions is 31%.  Our "suppliers" - China and India - account for another 32%.  That leaves the Third World with just 37%.

The "Equity" model reflects how emissions would be allocated by population. There, the Third World would have a legitimate claim to 53% of the remaining capacity.  The western world would be slashed back to around 11% (from the current 31%).  That would pretty much kill off our fossil-fuel based economy and require a rapid and radical transition to non-carbon, renewable energy. Given how successfully our governments have conditioned us to believe that losing fossil fuels will be the end of life as we know it, we're not going to accept the Equity model and, let's face it, we have all the guns.

That leaves the Blended model that gives the West an undeserved 'extra' share but increases the Third World share nominally.

Bear in mind that this proposal incorporates both a major cut in total emissions compounded by substantial reductions in our share of those reduced total emissions.  The pie has to get smaller and our slice of it even smaller yet. Which goes a long way to explaining why our supposed prime minister ducks a world leaders' summit on climate change.

The reality depicted in these charts utterly confounds Stephen Harper's vision of Canada as a filthy fossil-fuel superpower.  Like it or not, the world is going to have to squeeze into the equivalent of Carbon Spanx.  That's a tight fit and leaves little room for high-cost/high-carbon energy like - oh, I don't know - Athabasca bitumen.

And, of course, Mound, the projected emissions and the timeframe left to keep the world from rising above 2 degrees does not take into account, I assume, the methane being released from melting permafrost.

That's my understanding, Lorne. As I've written before there's no way of knowing for sure if we've actually crossed a climate "tipping point" that triggers natural feedback mechanisms and, potentially, runaway climate change.

The 2C target is supposed to give us a 66% chance of avoiding runaway global warming but it's based on a load of assumptions that could be optimistic. What's been going on in the Arctic, especially over the past decade, leaves me unsure.

The leading expert on the Greenland Ice Sheet, Jason Box, sees a "feedback loop" already underway. The warming Arctic is resulting in more wildfires that are covering the ice sheet in soot, leaving it ever darker. That accelerates warming and melting, increasing sea level rise. Warming Arctic water temperatures are impacting on glacier calving rates.

Box recently reported that sea level rise due to melting of the Greenland ice sheet is now doubling every five to ten years. If he's right and there's no way to arrest this Arctic black soot problem then, perhaps, all bets are off on runaway climate change.

The tar sands get their water, from the Columbia Ice Fields. On a visit back, I was really shocked to see, how rapidly the glacier is vanishing.

The extreme weather patterns are, destroying many countries food crops. The global food shortage, is only going to get much worse.

Harper nor China believe in climate change nor pollution. China has polluted much of their farmland and 40% of their water. Dead pigs come floating down China's rivers. And now, Harper has sold Canada to China as of, Oct 1st.

Having China in Canada for 31 years? Canada will be adding hugely, to the climate disaster. Harper and China will pollute the entire globe.

Needless to say, neither Canada nor China attended the climate change summit.

"The reality depicted in these charts utterly confounds Stephen Harper's vision of Canada as a filthy fossil-fuel superpower."

The real enemy of climate change is free trade. It creates a regulatory race to the bottom. The only way we can force countries to comply with GHG emissions reductions is with tariffs (and sanctions) enforced by common-regulation fair-trade blocks (as opposed to free-trade blocks.)

We also need tariffs to stop mercantilism (countries producing more than they consume where the excess goes to oligarchs in profits) and exploitation of workers (cheating workers out of their fair share of wages and benefits.)

Small government anti-tax ideology is also the enemy. We need progressive taxation to spend big money on green infrastructure projects to make the transition to a green-energy economy.

So replacing free-trade with fair-trade, restoring progressive taxation, bringing back Keynesian-era infrastructure spending to create jobs, and reducing inequality by regulation and redistribution of wealth through public benefits, are all essential components for necessary change.

The only way to stop our present course of self-destruction is with a different economic model — something other than free-market capitalism which has dominated over the past 35 years and created our globalized economy.

So although the plutocrats created free-trade globalization to overrule democracy and have the freedom to rape and plunder the globe without rules or accountability, globalization is actually the key to creating a global regulatory regime that will change the world: because all oligarchs need access to First-World markets to make their riches.

A little tangential there, Ron, don't you think?

Perhaps. But I'm just thinking out loud, making notes, trying to work out the angles.

The premise of Klein's new book is that our present economic model (market fundamentalism) is the problem. I definitely see where she's coming from.

Since economists tend to be enamored with the idea of free trade, they are largely a part of the problem.

Therefore, it's up to the people to try and come up with a workable, practical, alternative economic model (which must be based on solid economic principles to defeat the neoliberals.)

Since we are repeating all the mistakes of the 1930s, our economic crisis is just getting started. So this will either provide the impetus for revolutionary change or plunge the world into another world war.

I have faith the former will happen.

Australia needs to be added to the mix as well. They don't have water shortages there at all. Laughable that is all.