Why the F-35 Was DOOMed From Birth 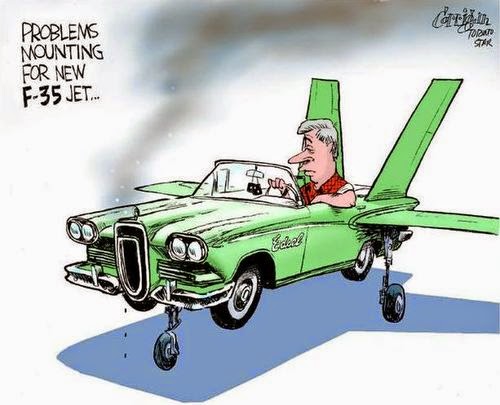 US Air Force Lt. Col. Dan Ward has  an interesting take on just when the F-35 light strike bomber went off the rails - right from the outset.


In February of 2014, Lt. Gen. Charles Davis, the Air Force’s top uniformed acquisition official, said big, audacious programs like the Joint Strike Fighter were “doomed the day the contract was signed.” As the former Program Executive Officer for the JSF, he brings a pretty credible perspective to the situation. Given his first-hand experience and the F-35’s track record of delays, cost overruns, technical problems, operational limitations, and the recent grounding of the entire fleet due to an engine fire, I am very much inclined to agree with him.
The phrasing of Lt. Gen. Davis’ assessment is important: He is not saying the F-35 was recently doomed, or is troubled because of late-breaking developments like sequestration, the Afghan drawdown, recent technical challenges, or the latest Chinese stealth fighter. Not at all. He is saying that America’s most expensive weapon system began its very existence behind the eight ball. It was doomed from the start.
The JSF malpractitioners chose to follow what we might call “the path of D.O.O.M.” – Delayed, Over-budget, Over-engineered, Marginally-effective — by establishing a massive bureaucracy, a distant delivery date, an enormous budget, and a highly complex technical architecture. This fostered an expansive culture where rising price tags and receding milestones were seen as inevitable and where the primary problem-solving strategy was to add time, money, and complexity to the project. Data from the GAO and other reliable analysts agree this is a demonstrably ineffective approach. Because it was on the Path of D.O.O.M., the JSF’s Nunn-McCurdy breaches in 2004 and 2010 were simply a matter of time.
...It didn’t have to be that way. There is an alternative path they could have followed which would have increased the likelihood of delivering an affordable system that is available when needed and effective when used. This better approach goes by many names, but I like to call it the FIRE method.
FIRE stands for Fast, Inexpensive, Restrained, and Elegant. Unlike the expansive D.O.O.M. culture, FIRE fosters a restrained approach to problem solving. Those who follow this path eschew large price tags and long timelines, instead placing a premium on speed and thrift as the Navy did with those Virginia-class submarines. Rear Admiral William Hilarides, the program executive officer for submarines, put it this way, “The Virginia-class program… was originally designed with cost effectiveness in mind. In order to reduce costs on this program, we have to change the way we build submarines, and that’s what we’re doing.”
...Restraint leads to an entirely different approach to solving problems than that followed by the D.O.O.M. method, and thus leads to different solutions. People who use approaches like FIRE leverage intellectual capital more than financial capital, and apply “reductive thinking methods” to prevent over-engineered solutions and requirements creep. Even before the contract is signed, they set up constraints and implement procedures designed to prevent the types of problems experienced on the JSF.
Is it too late to cancel the Joint Strike Fighter? Maybe, although an article by Col Michael Pietrucha in the May-June 2014 issue of Air & Space Power Journal made a strong case that it is not. But regardless of the future viability of that particular aircraft, it is certainly not too late to set other programs on a better path. Indeed, the Air Force seems interested in doing precisely that. In the same interview where Lt. Gen. Davis called the JSF doomed, he went on to point out that “we are not starting all the new audacious big programs that we were…” Instead, the Air Force is pursuing smaller, more restrained systems. Less D.O.O.M., more FIRE. Time will tell whether the shift towards less audacity and more restraint is permanent or effective, but it is certainly a step in the right direction.

The first sentence is important for Canada in this article naming the F-35 JSF (joint strike fighter) as the F-35 Light Strike Bomber. USAF General Hostage : "The F-35 is not an air superiority platform, it needs the F-22". Canada requires an air superiority / interceptor as the most important mission for Canada to protect air space and territorial sovereignty. Neither the F-35 or the F-18E Super Hornet are air superiority / interceptors. They are glorified strike jets lacking range and speed that do not have the super sonic armed cruise or the 1,000 km greater longer range capability of the three European options for Canada, the Saab Gripen E, EADS Typhoon and Dassault Rafale.
The F-35 "stealth" is a myth with new technology to detect it at long range and it has a very high heat signature that cannot be "cloaked". F-35 requires expensive lengthening of arctic runways by 2,000 ft and it requires the installation of a drage chute for such operations. The list is endless why the F-35 would be a disaster for Canada. The claim of technology superiority in the F-35 is insulting as Saab's overachieving best safety and engine reliability fighter in the world, the Gripen E interceptor fighter that would cost Canada less then 1/2 as much to buy and nearly 1/4 the cost to fly already is offered to Canada with a GaN radar and infra red tracking system a generation ahead of what the F-35 and F-18E are offering Canada. There are better more cost effective choice for Canada to provide a competent fighter to replace the CF-18 without consuming the defense budget. Demand a fair and open fighter tender process with clear mission requirements and budgets.

I share most of your views, Anon. Something I've tossed around is a joint venture with SAAB to incorporate all their manufacturing and technological advances into a new, twin-engine airframe.

Like it or not, Canada can't get by with just air superiority/intercept capability. We need a multi-role fighter but one with the performance characteristics to provide the range and speed we need to cover our vast, empty north.

The Mound of Sound , the Gripen E is true multi role. Gripens were flying recon missions over Lybia within 24 hours of deciding to go. It is the best weight lifting verses air frame jet Canada can buy with the ability to carry all NATO weapons. Gripen E has a total of 10 hard points of which 7 are for heavy loads. Capable of hauling loads such as 4x 2,000 lb GBUS with two missiles, external fuel and a precision targeting pod at once this jet proves it can perform the missions required for Canada. It is a fully NATO compliant jet that is also possible to be built in Canada. The GE engine is North American made in the USA as well as many important components such as UK made radar. It is designed to be far the most cost effective jet to upgrade as technologies evolve. A jet Canada can afford to buy, fly and upgrade that will remain a competent air asset for the RCAF is a good choice.

I hope Canada has the wisdom to have a fair and open fighter tender process that will include the Saab Gripen E. Such a jet would really put the feet to the fire of all the other options to justify their high purchase and operating costs. Gripen E has the performance, reliability and technology that makes it very competitive. Especially as part of a mixed fleet the Gripen E single seat and F twin seat's low operating costs will help keep the RCAF a flying air force with adequate flight hours.

Anon, there's no need to convince me of the merits of Gripen. The thing is there are no northern countries with the exception of Russia that have such a vast, empty Arctic territory. Because of everything from mechanical failure to bird strikes, we need a twin-engine aircraft for the north.

Canada has some interesting statistics from CF-18 bird strikes in the north and they drive home the need for twin engines. There's not much up there beyond an extremely harsh climate and airfields are few.

The thing is there is no existing fighter with the necessary capabilities other than the F-15 and the line will be closed very soon. That's why I like the idea of SAAB developing the sort of aircraft Canada needs on a joint venture programme.

Statistically you are safer in a single engine Gripen then the CF-18 or the F-18E and just as safe as any jet in the world no matter how many engines. This fact is even more interesting considering all three jets share the same base engine, the General Electric F-404 / F-414. The USA made F-414 to be used in the Gripen E for Canada is of higher power version that is currently used in the F-18E Super Hornet. But there are differences in the Gripen intake design and other engine related components which were thoroughly tested and designed for bird strikes and reliability and the list of patents that Volvo owns that are also used on the F-414 used in the F-18E is as long as your arm. Improvements that make it a stronger engine for such things as bird strikes. Gripen C have ingested seagulls and fuselage hits of up to swans and due to having two smaller intakes instead of one there is much less chance of a bird larger then that. Fact: There has never been a loss of Gripen in the entire program of well over 200,000 flight hours of which many hours in the arctic with minimal support. Also of fact is there has never been a loss of a life in the Gripen program as well as a structural or fatigue issue. I would not endorse any other single fighter unless it could prove the same. To compare the old jets of the past with the likes of the CF-104 to today's Gripen for reliability is just not fair considering the Gripen's 100% engine reliability that is better / equal to the twin jet options.

Correction from statement in the above post.: Fact: There has never been a loss of Gripen due to an engine / bird strike or fuel issue in the entire program of well over 200,000 flight hours of which many hours in the arctic with minimal support.