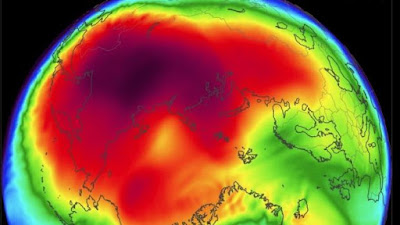 It's February. In the Arctic it's pitch black. The darkness lasts until early March.

February in the Arctic is normally cold, very cold. Only it's not, not this year. It's 25 degrees Celsius above normal. It's been above freezing.

On Monday and Tuesday, the northernmost weather station in the world, Cape Morris Jesup at the northern tip of Greenland, experienced more than 24 hours of temperatures above freezing according to the Danish Meteorological Institute.

"How weird is that?" tweeted Robert Rohde, a physicist at the University of California at Berkeley. "Well it's Arctic winter. The sun set in October and won't be seen again until March. Perpetual night, but still above freezing."

This next batch of abnormally warm air is forecast to shoot the gap between Greenland and northern Europe through the Greenland and Barents seas. Similar circumstances occurred in December 2016, when the temperature at the North Pole last flirted with the melting point in the dark, dead of winter. Similarly large jumps in temperature were documented in November 2016 and December 2015.

An analysis from Climate Central said these extreme winter warming events in the Arctic, once rare, could become commonplace if the planet continues warming. A study in the journal Nature published in 2016 found the decline of sea ice in the Arctic "is making it easier for weather systems to transport this heat polewards."

Arctic sea ice was at its lowest extent on record this past January, according to the National Oceanic and Atmospheric Administration.

"I have sailed boats through [the Arctic Sea] but never this time of year," tweeted David Thoreson, an Arctic photographer. "It's amazing to watch this unfold."

The record-setting temperatures and lack of ice is exactly what scientists have projected over the Arctic for years and it's fundamentally changing the landscape.

A study was just released predicting that for every 5 years we delay in slashing carbon emissions, we can expect an additional 20 cm. of sea level rise by the end of the century. That's a 'best case' scenario. It could be much more.

We've also been put on notice that, if we were to fully exploit Tar Sands bitumen, it's the end of our hopes for limiting global warming to a survivable level. There are people in Canada, powerful people, for whom this doesn't matter or at least not remotely enough to rein in this sector of our economy. They cling to the same morality that looked the other way while asbestos, banned for use in Canada, was exported for use in the Third World. When it comes to trade, that's when we see the shallowness of our vaunted Canadian values.
Posted by The Mound of Sound at 7:54 AM