Canada - the Last Refuge of the Polar Bear 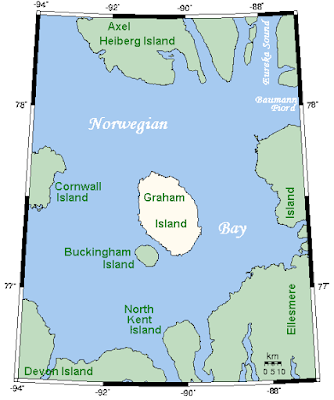 Scientists working on how to save the polar bear from extinction are focusing on Norway Bay in the Canadian archipelago. It's believed to be the last place that will have enough sea ice to sustain a polar bear population. It is hoped that perhaps 5,000 of the animals can be saved.


[S]cientists now predict that the global population of polar bears could fall from 20,000 to 30,000 today to fewer than 5,000 by 2100 — and beyond that no one knows. Even if a small population of bears manage to hang on, they’re not out of the woods.

Luckily for the bears and the humans who love them, [University of Alberta biologist Andrew] Derocher and a cadre of fellow scientists are developing a complex set of strategies to save the animals. It’s an audacious plan, encompassing everything from providing extra food for the bears to turning female grizzly bearsinto surrogate moms for their white-coated cousins.

But it may be all that stands between the bears and oblivion.

Ultimately, the only polar bears to survive in the wild may be the ones living in the Norwegian bay region of the Canadian archipelago.

“This region is expected to be one of the last bastions of Arctic sea ice,” says Steven Amstrup, chief scientist at Polar Bears International, a conservation group in Bozeman, Montana. “With the right planning and strategies, we can help polar bears remain there as long as possible.”

For 5,000 bears to survive in this region (the minimum thought to be required to prevent inbreeding), scientists believe the animals may need help from humans. Derocher envisions helicopters zipping around the region, dropping bear chow. Without such deliveries, he says, hungry bears might wander south into human settlements — and risk being shot.

Airdrops of bear chow wouldn’t come cheap. Derocher estimates that delivering enough chow to sustain those 5,000 bears could cost the Canadian government $2 million a month. Given the hefty price tag, he proposes that the chow be used only during times when the bears are finding it especially difficult to catch and kill seals.
Posted by The Mound of Sound at 6:47 AM

.. I follow Andrew Derocher via Twitter.. and some of his brilliant peers.. FYI I started dreaming about polar bears a ways back.. and now try to create a poem daily via Twitter, based on most recent dreams. They are not really poems.. but mean spirited shots at fat or fatuous political animals.

Hint.. the bear sweep south due to lack of sea ice and seals.. they swim the Great Lakes to feed on fattie GOP in America. Lay low in daylight & lick their paws, travel fast at night.. come north, loll about in the snow & ice..I don't know where I'm taking this but I figure to give it a serious shot.

These are serious beasts.. their sense of smell astonishing, their patience legendary.. They are apex predators.. and we can thank our politicians for doing their damndest to extirpate them .. very much like Orca, who's days are numbered.. hell, all cetaceans.. especially the ones the Japanese are harpooning & studying 'for science'


There is indeed a darkness to what's unfolding, Sal.