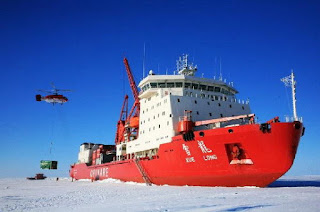 "Yeah, sure, you and whose army?" That was a fairly common taunt among boys when I was young. You and whose army is gonna make me. Yet it may find new life in Canada's dealings with China over the Arctic.

One of the key findings by Chinese analysts is the role China defines for itself as “an important stakeholder” in Arctic affairs. This point found its echo in an event on February 6 at the Woodrow Wilson International Centre for Scholars in Washington, which brought together experts from US think tanks and former US government officials.
...

Interestingly, the key member state that seems particularly concerned about what the white paper will mean for them is Canada. Its experts say China’s Arctic policy is attempting to tread a line between respecting the sovereignty of Arctic nations like Canada and the United States and leaving room to gain from disputes under international law.

Language like “respect for international law”, used in the white paper, is viewed by scholars such as Robert Huebert from the University of Calgary and Université Laval Professor Frédéric Lasserre as an attempt to articulate limits on member states’ sovereignty.
Canada is worried that China will adopt the same legal position as the US – treating the Northwest Passage as a “strait for international use” – while Canada claims it as its “internal waters”. Huebert added that inviting Chinese investment in the Canadian Arctic could be a double-edged sword for Canada’s economic benefit and environmental protection. Both Huebert and Lasserre hold that the white paper leaves out Chinese naval activities, especially around the fringes of the Arctic, which call for particular attention.

China, while not an Arctic nation, sees great opportunities in that region. For shipping it will use the relatively ice free and open northeast passage along Russia but it does have an eye on Canada's side of the Arctic Ocean. China already operates the largest non-nuclear icebreaker in the world and is building more in a shipyard near Shanghai. We've also seen in the South China Sea how Beijing manufactures territorial claims by constructing artificial islands on shoals and reefs.
Posted by The Mound of Sound at 11:23 AM

The Arctic is shared between Russia, Canada, Denmark , Santa Claus, Finland etc. The Arctic ocean contains claims by all the above, but only silly people would forget international maritime law .

Making claims that can't be defended will make Canada look foolish and inconsequential in international lies.

The Arctic Ocean is no different than the Atlantic or the Pacific.


I've been keeping tabs on this for some time, Rumley. Over the years, China's position on the Arctic and especially its rights there has been evolving. It can be helpful to recall some of its earlier pronouncements to help make sense of what it says today. You can find a number of posts dealing with this by searching this blog.