Kim Campbell made a bit of a fool of herself by claiming that women news anchors should not wear sleeveless attire. They lacked gravitas she said.

Sorry, Kim, the world has moved on and left you behind.

I'm old enough to remember when men all wore hats. It was the thing that was done. Until John Kennedy became president. He didn't wear hats and, soon enough, neither did the majority of men. JFK pretty much put paid to men's hats.

Then along came another White House resident, this one. 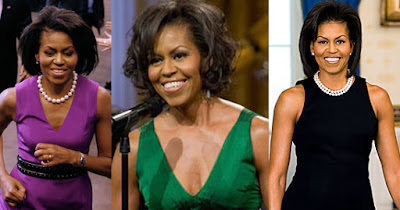 She wasn't a newswoman. She was the First Lady of the United States and no one, for a minute, imagined she lacked gravitas.  And, just to show that wasn't some fluke, here's the official portrait of Mrs. Obama. 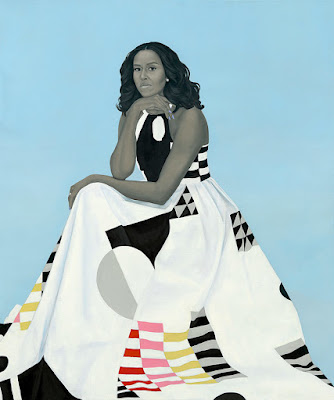 Nothing frivolous or lacking in gravitas about this portrait either. It exudes elegance. So, Kimmie, get with the times. Fedoras are out, sleeveless attire for women, should they choose to wear it, is just fine.
Posted by The Mound of Sound at 3:28 PM

I am mystified, Mound, as to why Campbell thought anyone would care what she thinks. It sounds worrisomely like a disturbing 'senior' moment, with perhaps more to come.

.. the political implosion in the tiny brains of so many 'political figures' seems astonishing

The Right To Bare Arms comes under attack from a mysterious former political figure who disappeared years back but has arisen to stalk the earth.. and the mainstream media leapt to her with mics and oxygen masks. Its like The Onion meets Monty Python.. and she only came back to further wound the reeling Conservative GOP's of Canada eh. Can't wait for her headlong rush to defend Patrick Brown or Rick Dykstra or like Kellie Leitch inform us how we should be excited by Donald Trump getting elected. Its silly season all over again..

Presumably she went skiing near Lake Placid years ago.. and walked to California and back several times.. before collecting her thoughts.. which it seems, weren't many.. and called Post Media or Paul Godfrey or Margaret Wente up.. Fashion Advisory from Kim Campbell.. who next.. Stephen Harper on shoe selection for modern men? Joe Oliver on music for your iPod ?

Kim Campbell was talking about tops or dresses with a part of the top of the shoulder showing not the photos you have shown on your blog with full shoulder and arms revealed. I really dislike this so called fashion as do many other women I have interviewed.