The Mango Mussolini Wants Himself a Parade 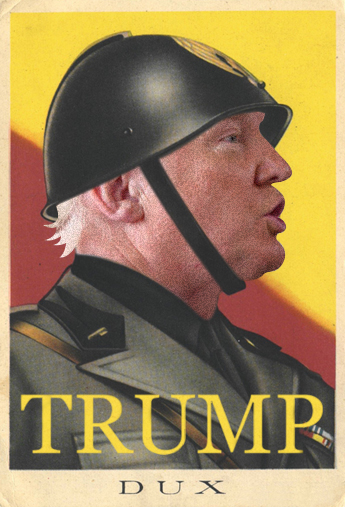 Not for nothing is he called the "Cheeto Benito" or the "Mango Mussolini."

Think of it as America's way of thanking Donald Trump for his service. He is, after all, the commander in chief you know, always ready to throw a snappy salute whenever he sees one of his minions in uniform. It wasn't always that way
of course. When it was Donald's turn to serve, during Vietnam, Trump was scoring Cheney-class draft deferments, five of them. Seems he had heel spurs (hey, Trump booster, Rush Limbaugh got out of the draft due to supposed anal cysts - that obviously still plague him). But let bygones be bygones. Trump loves the military now - at least from a safe distance.

It seems the parade will be staged on the 4th of July. Pentagon planners are racing against the clock to figure out how to do a world-beating military parade. Fortunately they don't have to re-invent the wheel. Just do what these other great world leaders did.

They're going to need to bring in some Russians to teach the Americans how to goose-step. I'm sure Cadet Bone Spurs will insist on it as he tries to show off to his pal Vlad on the reviewing stand.

.. skip the parade.. Trump has 3 more years to strip mine the environment.. and he's already deep into the process.. forget Stephen Harper.. Trump et al are truly dangerous. We need to think as North Americans.. not just oh Canada.. I give not a flying fluck how he enriches himself.. its how he deminishes us all - that freaks me..

And the Rebel's hired Sebastian Gorka.

Empty barrels have always made the most noise.

Nope, they are going to parade steath F-52's, invisible F-35's past him, tell him they did the same thing with tanks, missiles and soldiers,

Then ask him if he want's to see them again.

USA; been there done that!!