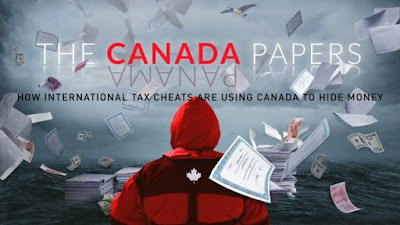 Is Canadian corporate law a money launderer's dream? According to The Guardian, we're right up there with Kenya.

Canada is one the world’s most opaque jurisdictions when it comes to identifying the owners of private companies and trusts, according to anti-corruption campaigners who say that more rigorous checks are required to obtain a library card than to set up a company in the country.

“Anyone can start a company in Canada. It costs about C$200 and the owner of the company can remain completely anonymous,” said lawyer Mora Johnson, who recently authored a report detailing the country’s lax rules around corporate registration.

Most provinces allow nominee directors and shareholders and do not require them to disclose that they are acting on behalf of another person. “Privately-held companies can easily be abused for tax evasion, for money laundering purposes and to stash the proceeds of crime,” said Johnson.

How Canada stacks up against other countries – including known tax havens – was suggested in a 2013 study by American researchers. After sending out thousands of queries about setting up anonymous shell companies, researchers ranked Canada among the easiest of 60 countries to set up an untraceable company, along with Kenya and a few US States.

This opacity – described in a recent Transparency International report as the “getaway car of financial crime” – has become the perfect vehicle for “snow washing”: the use of Canada’s positive image to tout the country as an offshore destination where suspect transactions can be legitimised.
...

A 2016 report found that nearly half of the 100 most expensive homes in Vancouver – which ranks among the world’s least affordable housing markets – were bought using shell companies, trusts or nominees.

“Is it a wealthy person who earned that money? Or is it the Hells Angels?” Johnson asked. “An Iranian or North Korean under US sanctions? We have no idea.”

Files from Mossack Fonseca, leaked in 2016 as part of the Panama Papers revealed another consequence, said Transparency International Canada’s James Cohen. “Canada is being sold through snow washing by foreign intermediaries, who are telling their clients that you can bring your illicit finances into Canada and they’ll be cleaned like the pure white snow.”

Jurisdiction over corporations in Canada is shared. There are federal corporations and provincial companies and a variety of factors that can make one preferrable to the other.

But, never fear, our federal government's tax sleuths at the Canada Revenue Agency are all over this. Friend, Lorne, referred me to another article from The Guardian detailing how the CRA is auditing food servers in Prince Edward Island who might have been dodging tax on their tips. The Trudeau government. They're sure cleaning house. Unless your house is really big and stashing cash in the Isle of Man.

TaxFairness.Ca has more on snow washing.
Posted by The Mound of Sound at 11:48 AM

Tangentially, should you wonder who the the government and the CRA are protecting us against these days, Mound, check this out:
https://www.theguardian.pe.ca/news/dozens-of-pei-servers-audited-by-canada-revenue-agency-over-tips-185212/

I guess such efforts leave little time for going after off-shore havens.


Thanks for the link, Lorne. I incorporated it into the post. Honestly, what is wrong with our country and this government? It's like Harper never left.

"I say this because I am concerned our province under the last administration has gained an international reputation as a scofflaw. As a jurisdiction where the rules do not apply to white collar crime, fraud, tax evasion, and money laundering, where even if the rules do apply, enforcement is absent.

It is clear, in my opinion, that the previous administration was aware we had a serious and growing reputational issue. It is also clear to me that they evaluated the costs of cracking down on white collar crime, on fraud, on money laundering, and determined that the benefits of inaction outweighed the costs of action.

Because they did not take the actions required to address the issues we have.

It is hard for me not to speculate that some may gone further and seen a lax approach to money laundering, fraud, corporate transparency, land title registry transparency, as a competitive advantage, or a budgetary advantage, for the province."


Thanks for this, Hugh. I think Eby's last statement nailed it. In the land of what the New York Times called the wild west of political cash, Clark and her gang were sufficiently amoral to see tolerance of criminality as a competitive advantage. It's disgusting.

The BC Liberal win in the Kelowna by-election shows that many people are either ignorant of what's going on, or they just don't care. It's disturbing.


I'm coming to believe, Hugh, that some parties actively encourage political disenchantment and public disengagement. And where they can't get people to walk away from politics entirely they still succeed if they can diminish their political engagement until it becomes relatively superficial. In this enfeebled state, public awareness and attention weaken to the point where the political caste can get away with more and, even when they can't, can more readily confound, confuse and distract constituents.

They don't want an informed public deeply and actively engaged in politics. It's just easier that way.