Okay. Well, He's the General. I Suppose He Knows What He's Talking About. 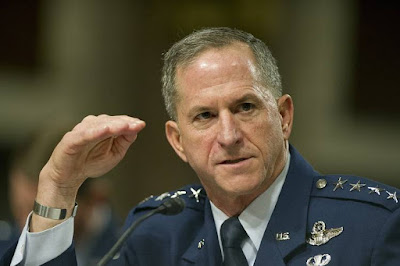 David L. Goldfein predicts it will only be a few years before the United States finds itself "fighting from space." The four star general and Chief of Staff of the United States Air Force is campaigning for American military superiority in space.

“[It’s] time for us as a service, regardless of specialty badge, to embrace space superiority with the same passion and sense of ownership as we apply to air superiority today,” he said.

These are some of the strongest words yet from the Air Force chief of staff to get the Pentagon thinking about space—and to recognize the U.S. Air Force as the service branch best suited for the job. “I believe we’re going to be fighting from space in a matter of years,” he said. “And we are the service that must lead joint war fighting in this new contested domain. This is what the nation demands.”

Part of Goldfein's anxiety is rooted in inter-service rivalries. There have been proposals for an independent "space command" that challenge the US Air Force expectations that it will run the space effort. And the US Navy also seems to want a piece of the action.

Keep banging on that drum fellas. It never gets old, does it.

The US is a party to the Outer Space Treaty of 1967, art. IV of which states:
States Parties to the Treaty undertake not to place in orbit around the earth any objects carrying nuclear weapons or any other kinds of weapons of mass destruction, install such weapons on celestial bodies, or station such weapons in outer space in any other manner.

Obviously, this is "very unfair" to the United States and I wonder when Trump will announce a pullout.


I wonder if anti-satellite/anti-missile weapons fall into the WMD prohibition, Cap? The main focus, as I understand it, is to blind your adversary and destroy incoming missiles before they can re-enter the atmosphere.

Anyong....I'd like to know how....
“[It’s] time for us as a service, regardless of specialty badge, to embrace space superiority with the same passion and sense of ownership as we apply to air superiority today,” will make a difference in being superior when all countries take their attitudes with them whether they are first or not. Let's blow the world up and then there won't be anyone around to fight anymore. And no, it never gets old. Let's be first and get rid of all the riff-raff. What a fabulous thought...dah!

Instead of trying to develop these and other weapons, the U.S. should be negotiating international treaties to prevent them. Obviously, that won't be happening under a "master negotiator" like the Tangerine Toddler.

Cap, as I recall it, George W. introduced a space policy that provided for American superiority. "The new National Space Policy rejects Arms control agreements that might limit U.S. flexibility in space and asserts a right to deny access to space to anyone "hostile to U.S. interest."