Well, That's Certainly Sooner Than We Had Expected. 1.5 C In Just Five Years. 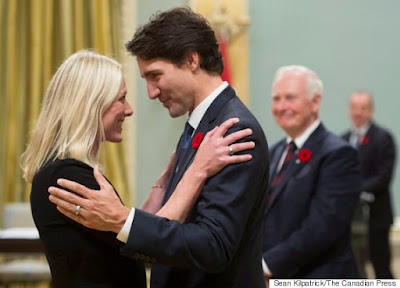 Who can forget the heady days of 2015 when a newly minted prime minister and his enviromin stormed the Paris Climate Summit to promote a new global warming limit of just 1.5 degrees Celsius by 2100, sweeping aside the old target of 2C by 2100,

So, how is that working out? Well, Canada is well off target for meeting its greenhouse gas emissions reductions. And we're still sticking with Stephen Harper's pathetic targets. In other words, they were just f#@king with ya.

The fact is, it seems we're already out of time for that 1.5 C nonsense. Britain's Met Office warns that we're going to break through that 1.5 C ceiling in  the next five years.

“It is now possible that continued warming from greenhouse gases along with natural variability could combine so we temporarily exceed 1.5C in the next five years,” said Stephen Belcher, the chief scientist at the Met Office.

Global temperatures have been steadily rising over the past 20 years, and in each of the last three years averages have topped the 1C threshold. Last year was the second hottest on record, and the hottest not to have been given an additional boost by the El Niño effect.

The 1.5C threshold was set at Paris as an ambitious target because scientists fear that a world warmer than that would be susceptible to ever wilder climactic events that in turn would precipitate greater drought, habitat loss, food insecurity and mass migration.

The thing to bear in mind is that we've already "locked in" centuries of warming. The greenhouse gas, CO2, lasts for centuries. How many centuries we still don't know. Methane, by contrast, is 104 times more powerful than CO2 over the first 20 years but falls off quickly after that so, by the end of a hundred years, its warming factor is only 28 times more powerful than CO2. A mere 28 times. It's like the burner on the stove that you can't turn off.

And every tanker that sails from a Canadian port with a gutload of high-carbon bitumen makes an already nightmarish situation far worse. Trudeau knows that. Notley knows that. They don't give a f#@k what happens to your grandkids. They've got bitumen to flog, as much and as fast as possible.

And here's another thing to bear in mind. These figures are based on man-made emissions - methane from agriculture, CO2 from internal combustion engines, that sort of thing. Only now we're not alone. We've awoken the sleeping giant, nature itself. As we've thawed the Arctic nature is releasing increasing volumes of seabed methane, clathrates, and methane no longer safely sequestered within the melting tundra and permafrost.
Posted by The Mound of Sound at 11:45 AM

The economy is powered by fossil fuels, the burning of which results in GHG emissions.

Reducing GHG would reduce the GDP, which conflicts with Govt's primary mandate: to grow GDP every year.

Govt tries to say they can shrink GHG and grow the GDP at the same time, which is nonsense.


Hugh, we don't need fossil fuel energy to power the economy. That's nonsense perpetuated by the fossil energy giants and their provincial and federal government boosters.

did the massive (and ongoing) methane release from the oil & gas fracking revolution tip us into 'runaway global warming'?


How do you isolate one source from the many, NPoV? We have, however, been bluntly warned that exploiting the Tar Sands as we seem increasingly intent on doing with great urgency could be a global tipping point.

Just a guess. Perhaps I'll flatter myself and call it an educated guess ... including a lot of info you post.

We saw a pause in CO2 growth after the 2008 recession but no ease in effect. We can't even effectively measure the methane leaking from conventional ops (way beyond regulation according to my sources) and the methane leaking from fracking is way more than with conventional ff. And the USA became the ff leader in the world (that's a lot of fracking) in less than a decade.
2008 is about the time the fracking juggernaut was getting rolling. All the other sources you mention have had more linear growth. As you mention, methane has much shorter persistence than CO2 but way more effect.
The behavior of the jet stream (causing or resulting in weather havoc with warm arctic and cold temperate zones) is increasingly erratic.
http://arctic-news.blogspot.ca/2018/02/north-pole-forecast-to-be-above-freezing-on-feb-5-2018.html

Tipping points and their causes are easier to spot in the rear-view mirror than looking ahead, so it is just informed speculation... Might all the stuff you list in this post indicate the run-away phase may have begun? If yes then the timing coincides with the goose in fracking.