Once Again the NRA, the Gun Lobby and America's "Bought and Paid For" Congress Deliver Living Hell to an American School. 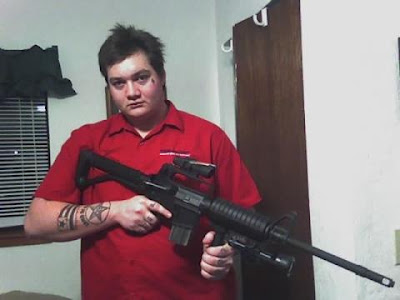 For the record, we're halfway into February of 2018. Today, Valentine's Day, Florida chalked up America's 18th school shooting of the year.

At least 17 dead, most of them freshman students of a highschool in Parkland, Broward county. The 19-year old gunman used the school fire alarm to draw his victims into the hallway where it was easier to gun them down.

Initial reports suggest the weapon used was America's schoolhouse slaughter weapon of choice, an AR-15. The shooter was old enough he could have walked into any sporting goods store and got one plus a rampage-load of ammo.

And Trump has the audacity to call other nations "shitholes."

The Onion responded with its now familiar massacre headline: "'No Way to Prevent This, Says Only Nation Where This Regularly Happens."
Posted by The Mound of Sound at 5:23 PM

I went into the wrong business.
I should have specialized in arms sale to the general public. I'd have made a killing by now!
Think about it! Even poor "losers" are willing to spend the last of their life savings just to obtain some of the priciest weapons and ammunition simply to go on a twenty minute massacre spree just to obtain their "fifteen minutes of fame".
I'd just be doing what a lot of drug dealers do----making profits off of other people's foolishness, narcissism, faithlessness, and psycho tendencies.


Tal, poll after poll shows the American public support gun control but the money marriage between Congress and the gun lobby, especially the NRA, defeats them again and again. I wrote a post today pointing out that murderous kid didn't enter that school alone yesterday. He had every "bought and paid for" member of Congress standing right there beside him.

You still have to wonder how highly that kid's late mother thought of him as a person
...and that, just the same, his parents still apparently managed to provide for him in the financial and material sense for him to be able to have the money and means of acquiring somewhat pricey weapons, even as he feels "disowned by" family and community alike.