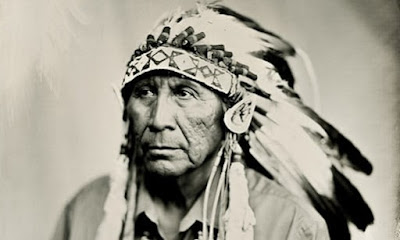 Around the world, indigenous peoples are occupying the front lines in the battle to defend the planet's environment. Chief Avrol Looking Horse, spiritual leader of the Lakota, Dakota, Nakota people, writes in today's Guardian that Standing Rock is everywhere.

Our Elders foretold of a Black Snake and how the Water of Life — “Mni Woc’oni,” which is our first medicine — would be affected if we did not stop this oncoming disaster. Mni Woc’oni is part of our creation story, and the same story that exists in many creation stories around Mother Earth.

When we say “Mni Woc’oni” — Water of Life — people all over the world are now beginning to understand that it is a living spirit: it can heal when you pray with it and die if you do not respect it. We wanted the world to know there have been warnings in our prophecies and, as we see it, those warnings are now taking place. It was said water would be like gold. It was said that our spirit of water would begin to leave us.

What happened at Standing Rock has awakened many of my own people, and people across the world.

It was at Standing Rock that so many came together to share their stories and knowledge of what was happening in their territory, sharing ideas on how to move toward sustainable living in our relationship to land, water, and food.
...

In the protection of Mni Woc’oni, it is more than oil pipelines threatening the well-being and future of our water. Near the native territory of the Sisseton Wahpeton Oyate, concentrated animal feeding operations or “CAFOs” are draining and degrading the land and water. As a result, the air is toxic, swamps have dried up, and aquifers, to which the people are supposed to have water rights, are being drained. Residents have mortgaged their homes to fight these threats in court and lost. In other places — in mining spills across South America and Africa and at Fukushima — man has gone too far.

Water is a source of life, not a resource.

Pierre's buckskin jacket won't help Justin this time.
Posted by The Mound of Sound at 8:50 AM

.. this is getting crazy Mound...
I thought we hit peak crazy a ways back
I was in dreamland..

We are just at the appetizer stage
of an Italian wedding..
& 13 courses to come..


I don't know, Sal. I find real inspiration in what indigenous people, including Canada's First Nations, are doing, not only in their own stead, but to rally others to defend the planet. In many countries, especially in South America and Africa, they're paying for it with their lives.

These sacrifices show that acts of civil disobedience in a country like our own are a small price to pay for pushing back against those who choose short-term and often delusional gain at the expense of the nation and our future generations.

Ottawa has been doing this for generations but, for all but the last twenty or so years of that period, we probably didn't know any better. That excuse is no longer available to the Stephen Harpers and Justin Trudeaus of our country. These people know exactly what they're doing. They know exactly what's at stake for our nation and our people. They're making their choices, imposing their will on us, despite that knowledge. Trudeau doesn't look quite so pretty when you think of him in that context. To me, the gap between Trudeau and Harper is rapidly narrowing.

Funny. I'm doing my income tax. I sent some money to Standing Rock and some to Canadian First Nations groups fighting pipelines and governments. But do I have receipts to claim money back from the government for my good deeds . Of course I don't.