Grease the Skids, It's Looking Stormy 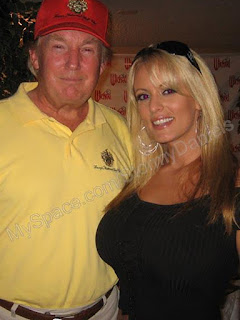 It's a now familiar pattern for the Trump brigade. At first deny everything, no matter how implausible the denial, and hope that whatever it is dies a natural death.

If repetitive denial doesn't work, invent some tall tale, again no matter how implausible, and see if that won't work.

Trump continued to claim it never happened but word got out that Stormy's silence was bought for a tidy payment of $130,000.

Apparently Team Mueller has been looking into that and it seems they've got Trump dead to rights. Time for the Hail Mary pass. Wait for it.

Trump's lawyer, Michael Cohen, now claims he paid the hush money. He paid the $130,000 out of his own pocket.  He stopped well short, however, of claiming that Trump knew nothing about it.

It's hard to see how Cohen's new tale, even if it was true, could make any difference. He was on Trump's payroll after all. It was hardly some act of charity. Cohen, therefore, can be seen as having made an undisclosed contribution of value for the furtherance of Trump's campaign prospects. It's hard to imagine that, given the campaign disclosure law, Cohen would have placed his own client in jeopardy by concealing the payment from him.

I feel sorry for Melania, sort of, but also for Sarah Huckabee Sanders. She's been working so hard lately lying for Donald Trump that her face is beginning to slide off her head and the first wisps of smoke are coming from her ears.

Now, I'm thinking the GOP has the solution to this mess right there in its own ranks in Washington - Joni Ernst. Joni campaigned for her Senate seat with ads bragging about how she grew up on a farm castrating pigs. Sounds like there's a hog in the White House who could use a bit of Joni's magic. Just sayin'

UPDATE: The Sydney Morning Herald offers a tidy analysis of just what Michael Cohen actually said and what he didn't exactly say. Worth a read.

"Trump's lawyer, Michael Cohen, now claims he paid the hush money. He paid the $130,000 out of his own pocket." Wow, people serving politicians are really generous with their own money.

Indeed, I've seen this script before somewhere. As I recall, this ought to result in Stormy being charged with taking a bribe, but Cohen and Trump both skating away scotfree. We'll soon see if the FBI's become as politicized as the RCMP.

Good call Cap!
Will the innovative new legal concept, The Immaculate Bribe, invented right here in Canada make the leap to other jurisdictions?

.. what th hell ? ?
Did the 'whirled' reverse it polarity ?
I read David Climenhaga twice to get balanced, prior
then read your discourse..
I will probably have to read Lorne n Owen 5 x
just to get back to reality
plus a dash o montreal simon
to leaven the bread.. so to speak

What is going on today ?
Trump's lawyer pulls a 'Nigel' type payment
out of his arse or chequebook.. But that's OK..
becuz.. look over there its the Olympic Curling ! !

FYI .. its getting silly..
FYI I do not buy gossip rags at grocery stores
famous women abducted by aliens & thereby impregnated
nor do I watch Fox TV
which it seems goes further into fantasy world
which appears to be occupied
by Trumps & Huckabees

The hole keeps getting deeper. They don't kow which way is up.


It's an easy thing, actually, and some lawyers do it for corporate clients. The client says cut me a deal on this file and I'll make it up to you on the next file. It happens. Cohen's 130-large would simply be built into his bill on some other Trump file. This is really easy on litigation files where lawyers are allowed to charge a "success" premium. When you lose or get a mediocre result, the court may allow you to charge only your hourly rate times hours logged. If you get a fantastic result, you're allowed to charge an appropriate success factor.


And, before I'm done, you dour old geezers, not one of you responded to the Jodi Ernst ad. I was quite pleased with myself to a) have remembered that (or pretty much anything these days) and b) worked it into the post. Just the mental image of Jodi, implements in hand, going up to the White House to de-nut the Mango Mussolini struck me as somehow precious.

As you say, Mound, Trump's lawyer could have recouped his outlay on the next file. But if you carefully parse what he said, there's an easier option. From your link, "Michael Cohen said in a statement to The New York Times that he was not reimbursed by the Trump Organization or the Trump campaign for the payment to Stormy Daniels." OK, sounds good, but what about Trump himself? This might have been one of those rare situations where Trump reached into his own wallet.

As for Jodi Ernst gelding Trump, I'm pretty sure she's too late. Putin's likely using them for clackers.