If This Keeps Up, I Might Start Feeling a Bit Sorry for Donald Trump. 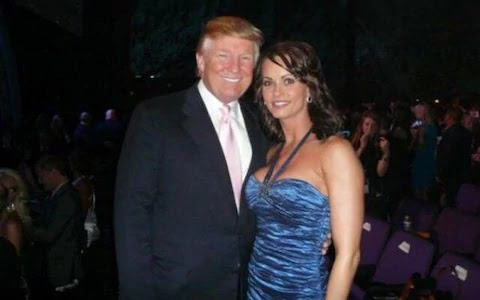 President Donald Trump and his allies concealed an affair with a former Playboy model through secret meetings, payoffs and legal arrangements, according to a report published Friday inThe New Yorker.

Karen McDougal, a former Playboy Playmate of the Year, documented her alleged nine-month affair with Trump in an eight-page handwritten note shared with The New Yorker.

McDougal, 46, claims Trump once offered to pay her after they had sex in a private bungalow at the Beverly Hills Hotel, where many of their purported liaisons took place. She alleges Trump tried to avoid creating a record that might expose their relationship by having her pay for her own flights and then reimbursing her.

McDougal confirmed to The New Yorker a Wall Street Journal report that said American Media Inc., the publisher of the National Enquirer, agreed to pay her $150,000 for her story but then did not publish it.

David Pecker, the CEO and chairman of AMI, is a Trump supporter who has reportedly described the president as a “personal friend.” Six former AMI employees told The New Yorker that Pecker often purchases a story in order to bury it — a tabloid industry practice called “catch and kill.”

In a statement provided to NBC News, AMI appeared to dismiss the report: "The New Yorker and Ronan Farrow's suggestion that AMI engages in any practice that would allow it to hold influence over the President of the United States is laughable."

I heard she said it was no big deal.


Really? I'm going to see if I can find a complete list of Donald Trump's known conquests.

.. the guy's a complete dickass Mound..
hardly worth your time.. .. I take that back
aint worth a split second of your time..

Yes.. I comment here n there
re the current loser in chief..
the astonishing phenomena
of it all..

Marines saluting the prick
Its just to laugh..

Trump perfectly represents
the fouled toilet state
and here in Canada
we best be paying attention..
We are not immune
to such disease..


No, we're not immune, Sal. A bit more circumspect to be sure but not immune.