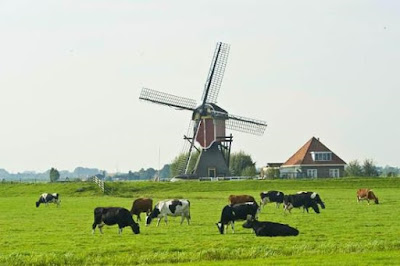 This is the sort of thing you've got to expect in a massively overpopulated world. The Dutch are up to their dikes in cow shit.


There is a dirty stench emanating from the Dutch dairy sector. The industry is, by most measures, hugely successful: despite the small size of the country, it is the fifth largest exporter of dairy and has a much-touted reputation as the tiny country that feeds the world.

But there’s a catch: the nation’s 1.8 million cows are producing so much manure that there isn’t enough space to get rid of it safely.

As a result, farmers are dumping cow poo illegally, the country is breaking EU regulations on phosphates designed to prevent groundwater contamination, and the high levels of ammonia emissions are affecting air quality.

About 80% of farms in the Netherlands produce more dung than they can legally use on their farm. To get around the limits, farmers pay an estimated €550m a year to get the manure removed. A recently uncovered fraud found a number of them had been avoiding the cost altogether by transporting the manure off-farm on paper, but in reality dumping it on farm fields.

The Dutch are already allowed to spread more manure on land than the rest of the European Union, but a large expansion in the sector in recent years has seen phosphate levels repeatedly exceeded. Under pressure from the EU, the Dutch government has now been forced to pay farmers compensation to try to get them to reduce cow numbers.

There was a time, when mankind's numbers were at least a third, probably half of what they are today, that we were living in balance with our very finite ecosystem. Those days are over, even for the incredibly tidy Dutch. The Netherlands produces too much phosphate, a great destroyer of marine life in both fresh and coastal salt water. In many other countries, industrial agriculture is rapidly degrading farmland and threatening global food security. The thing is, we just can't keep going this way.

All of our leaders are disciples of endless, exponential growth. Yet our planet's ecosystem is like a child's party balloon. There's a limit to how much air you can blow into it and, when you pass that limit, well, you know. If you don't, feel free to ask the Dutch.