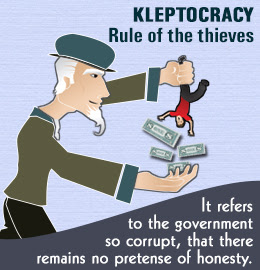 So stupid. The Gullibillies believed Trump was going to drain the swamp only they got - just what they had coming - a true, "smash and grab" government.

They handed the keys, all of the keys (the House, the Senate, the White House), to a GOP who had been just waiting for the chance to pillage the state and did they ever.

Check out the excellent article at Vox that explains how, in just one year, the Republicans arranged the wholesale looting of America. Ever wonder why so many veteran Republican legislators have announced they're retiring, won't seek re-election? That's because the first rule is to put as much distance as possible between yourself and the scene of the crime before anybody notices what's happened.

When it comes to the Gullibillies, people that stupid will always be the lawful prey of people as corrupt as today's Republicans. Check out the article, it's a good read.

For something closer to home, more immediate and infinitely more frightening, read Michael Klare's essay at Tom Dispatch about how Trump is militarizing America's energy policy.

Unless Trump can somehow be stopped and his course rapidly reversed, the United States could plunge the world into a climate change holocaust. It'll mean death, not in millions, but in billions. And, yeah, you can fairly call that a holocaust.


Last month, if you listened to the chatter among elite power brokers at the World Economic Forum in Davos, Switzerland, you would have heard a lot of bragging about the immense progress being made in renewable energy.  ...Only one major figure defied this trend: U.S. Secretary of Energy Rick Perry. The United States, he insisted, is “blessed” with “a substantial ability to deliver the people of the globe a better quality of life through fossil fuels.”

A better quality of life through fossil fuels? On this, he and his Trump administration colleagues now stand essentially alone on planet Earth [not quite, right Justin?]. Virtually every other country has by now chosen -- via the Paris climate accord and efforts like those under way in India -- to speed the transition from a carbon-based energy economy to a renewable one.

From the onset of his presidency, Donald Trump has made it clear that cheap and abundant domestic energy derived from fossil fuels was going to be the crucial factor in his total-mobilization approach to global engagement. In his view and that of his advisers, it’s the essential element in ensuring national economic vitality, military strength, and geopolitical clout, whatever damage it might cause to American life, the global environment, or even the future of human life on this planet. The exploitation and wielding of fossil fuels now sits at the very heart of the Trumpian definition of national security, as the recently released NSS makes all too clear.

“Access to domestic sources of clean, affordable, and reliable energy underpins a prosperous, secure, and powerful America for decades to come,” it states. “Unleashing these abundant energy resources -- coal, natural gas, petroleum, renewables, and nuclear -- stimulates the economy and builds a foundation for future growth.”

What really matters to Trump are those domestic reserves of fossil fuels. Only by using them to gain energy self-sufficiency, or what he trumpets not just as “energy independence” but total “energy dominance,” can the U.S. avoid becoming beholden to foreign powers and so protect its sovereignty. That’s why he regularly hails the successes of the “shale revolution,” the use of fracking technology to extract oil and gas from deeply buried shale formations. As he sees it, fracking to the max makes America that much less dependent on foreign imports.

Does this sound vaguely familiar?

The final step in the president’s strategy to become a major exporter involves facilitating the transport of fossil fuels to the country’s coastal areas for shipment abroad. In this way, he would also turn the government into a major global salesman of fossil fuels (as it already is, for instance, of American weaponry). To do so, he would expedite the approval of permits for the export of LNG, or liquefied natural gas, and even for some new typesof “lower emissions” coal plants. The Department of the Treasury, he revealed in that June talk of his, “will address barriers to the financing of highly efficient, overseas coal energy plants.” In addition, he claimed that the Ukrainians tell us “they need millions and millions of metric tons [of coal] right now. There are many other places that need it, too. And we want to sell it to them, and to everyone else all over the globe who need[s] it.” He also announced the approval of expanded LNG exports from a new facility at Lake Charles, Louisiana, and of a new oil pipeline to Mexico, meant to “further boost American energy exports, and that will go right under the [as yet unbuilt] wall.”

Such energy moves have generally been viewed as part of a pro-industry, anti-environmentalist agenda, which they certainly are, but each is also a component in an increasingly militarized strategy to enlist domestic energy in an epic struggle -- at least in the minds of the president and his advisers -- to ensure America’s global dominance.

Donald Trump and his administration of climate-change deniers are quite literally living in the wrong century. The militarization of energy policy at this late date and the lodging of fossil fuels at the heart of national security policy may seem appealing to them, but it’s an approach that’s obviously doomed. On arrival, it is, in fact, already the definition of obsolescence.

Unfortunately, given the circumstances of this planet at the moment, it also threatens to doom the rest of us. The further we look into the future, the more likely international leadership will fall on the shoulders of those who can effectively and efficiently deliver renewables, not those who can provide climate-poisoning fossil fuels. That being so, no one seeking global prestige would say at Davos or anywhere else that we are blessed with “a substantial ability to deliver the people of the globe a better quality of life through fossil fuels.”
Posted by The Mound of Sound at 10:46 AM

.. I fully believe, we in Canada must think as North Americans
Secondly, I believe we as Canadians must demand from
our 'public servants', provincial and federal
a charted breakdown of all fossil based resource stripping
and exports..

This would in simplistic form outline all end resource
all related infrastructure, all end delivery points & 'deals'
and all consequence thereof in between..

Would also require identifying all subsidies
to whom, why.. pollution exemptions or violation history

In other words.. it would mean tar sands and fracking
ie whether dilbit, LNG or shale oil
must be identified in all aspects.. whole processes illuminated
where the money goes, how n why
any mythology or fallacy re jobs jobs jobs revealed
temporary foreign workers.. that kind of stuff
how Canadians get 'paid back'
for any sellout by government..

Related extirpation of species, food chains or killoff of habitat
must be conmected.. ie boreal caribou
or wild salmon.. and the key inter-relationships
'jobs jobs, the economy stupid
hardlly cuts it..

I read where someone, I forget who, said, that the reason why so many veteran Republican legislators are retiring is because they are cashing out with their millions and millions of dollars."Smash and Grab' is an excellent description of who these people really are. The U.S. will stop at nothing to get what they want, but what they want usually belongs to someone else. They take it anyway through force.


Sal, please take your thoughts, compose them appropriately in a letter to our prime minister, and notify me immediately you have his response.


You're quite right, Pamela. Even such prominent Republicans as Lindsey Graham openly stated, prior to the vote on the Great Tax Theft, that their patrons, the Donor Class (the Kochs, the Coors, the Adelmans) were demanding their due unless it was passed. They needed a unified government to pull this off. They got it, they did it, and they're gone, off to their reward.