OMG, It's Trump With a Badge 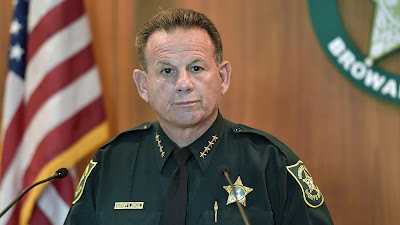 The sheriff of Broward County, Florida, sounds like a Trump wannabe.

Sheriff Scott Israel was quick off the mark to heap scorn and derision on the school's rent-a-cop, Scot Peterson, who remained outside the Parkdale high school while the shooter killed 17 and wounded more than 20 others in a fusilade of gunfire inside.

Then word got out that the first cops who did storm the school, officers from the Coral Springs department first passed three of Sheriff Israel's deputies who were also hunkered down outside the school. Bad went to worse when it came out that Israel's department had also received repeated warnings about the shooter but failed to even initiate a report.

Interviewed on CNN, Sheriff Israel said he would not resign and even gave himself a pat on the back suitable for Donald Trump himself.  "I can only take responsibility for what I knew about. I exercise my due diligence. I've given amazing leadership to this agency."

It almost looked comical to see sheriff Israel with four generals' stars on his shirt collar like some latter day George Patton advancing and retreating at the same time; absolving himself of responsibility while simultaneously gilding himself with praise.

Where do they find these assholes?

Oh, nevermind. Anon (probably Cap) has provided this lovely link to the SunSentinal web site that offers an eye-opening look at sheriff Israel. He's even connected to longtime Trump advisor Roger Stone.
Posted by The Mound of Sound at 9:00 AM

While backing then sheriff Al Lamberti in 2011, Stone told the Sun-Sentinel that "Scott Israel is an unqualified punk, a racist and a thief."

One can't get much lower than self-aggrandizement in the midst of tragedy, Mound.

Lorne, if you follow the link Anon left it gets so much grubbier. The guy is even connected to Trump's dirty trickster, Roger Stone.