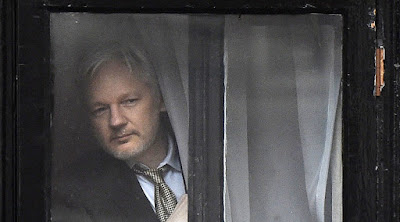 If there's one thing that Donald Trump fears, it's evidence emerging of very real collusion between Russia and his election campaign.

That evidence, or at least one important element of it, is currently holed up in the Ecuadorean embassy in London. It has a name - Julian Assange.

When the facts began to emerge, WikiLeaks die-hard fans, most of them from the political left, indignantly defended Assange against claims he was bent and working for Donald Trump. I caught hell on this blog from the Assange faithful who refused to believe that wee Julian was anything more than a moving target for political persecution.

That was then and, as they say, this is now. There's plenty of evidence that Russians hacked Hillary's and the DNC's computers, made off with thousands of emails, and bulk fed them to Assange inside the Ecuadorean embassy. There has been evidence that Assange communicated with the Trump campaign, even had at least one visit from Trump confidante, Roger Stone, numerous visits from Trump proxy, Nigel Farange, and even released Hillary's emails when they might best suit the Trump campaign.

For Assange, the bubble burst with the disclosure of his own correspondence in November, 2017. Ever since then he's been radioactive to the Trump administration. Trump, who repeatedly praised WikiLeaks in the runup to the election never mentions the name any more.

Here are a few gems from the past. From The Guardian, WikiLeaks asked Team Trump to twist Australia's arm to have him appointed his country's ambassador to the United States.  From The Intercept, Julian Assange's hatred of Hillary Clinton was no secret. His advice to Donald Trump was.  CNN reported that Trump's data mining service, Robert Mercer's Cambridge Analytica, communicated with Assange. Steve Bannon, who became Trump's campaign manager, was on the board of Cambridge Analytica when it contacted Assange. This stuff goes on and on and on.

Since the Russia investigation took off, Assange has become persona non grata to Team Trump. Even Don. Jr. has stopped replying to Assange's emails. Ecuador has become increasingly desperate to offload their inconvenient guest going to the point of granting Assange Ecuadorean citizenship and trying to get the Brits to give him diplomatic recognition. Fat chance.

This must be an awkward time for Julian Assange. In addition to his earlier legal woes, the Swedish and British stuff, he knows he's got Mueller's investigators on his tail. That must worry Donald Trump every bit as much.