How Democracies Die. It Begins At the Ballot Box. 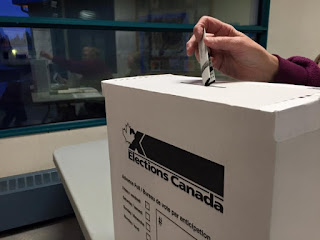 One thing we've learned about modern despots is that they almost always begin by winning elected office.

Hitler did. Mussolini did too. Ditto for Viktor Orban, Recep Erdogan, Hugo Chavez - and Donald Trump, among others.

Two Harvard political scientists, Steven Levitsky and Daniel Ziblatt, have written a book, "How Democracy Dies," that maps the road to authoritarian rule.

"Trump was easily identifiable as someone who is not committed to the democratic rules of the game," Levitsky told Newsweek on Thursday. “There is real cause for concern for the health of our democratic institutions.”

The four markers are:


Rejecting or showing weak commitment to democratic rules.
Denying the legitimacy of political opponents.
Encouraging or tolerating violence.
A readiness to stifle or limit civil liberties of opponents, including media.

"Those are things that democratic candidates in the U.S. simply do not have," Levitsky said. At least, until Trump.

The checklist is meant to be a litmus test for candidates—not incumbents—for good reason, Levitsky said.

“Once they’re in office, it’s too late,” he said. “The point is the best way to stop an authoritarian is to prevent them from getting into office in the first place. Once they get elected to office, it gets much more difficult to stop them.”

In modern times, countries don’t typically collapse into authoritarian rule all at once. Countries like Venezuela and Turkey voted for rulers like Hugo Chavez and President Recep Tayyip Erdogan, respectively. They then devolved, with the consent of their constituency, into authoritarianism.

The slow march toward dictatorship was also the case in Russia, the Philippines, Nicaragua, Ukraine and other countries around the world.

“This is how democracies now die,” the authors wrote. “Democratic backsliding today begins at the ballot box.”

We've been warned. This is real. It's happening again and again in every corner of the world, even in the United States. Liberal democracy is under attack. One way to safeguard against it is electoral reform, the very thing Justin Trudeau solemnly promised until he somehow changed his mind.

Trump's fondness for other authoritarians, including thugs such as Rodrigo Duterte, is well known.  Now he wants to join the club by advocating for the death penalty for drug dealers.

Anyong....one thing is sure...no country can return to the "good ol' days" and what was that in the first place? Britain and Br exit is calling it a return to "Nation State". When was Britain ever that? They were as most countries in Northern Europe Monarchies and were not working too well. So, it is very important for people in Canada to be encouraging our young people to get involved with Political Science and for them to vote. High School Students have proved they can fight back as in the Florida incident. And, we have to begin talking about "Money" out loud with its affect on how those uneducated billionaires manage to swing being elected. Being on top of security of a country is first and foremost. Justin Trudeau was set up and neither the RCMP nor The Canadian Security Intelligence Service did anything about his lunch with a Criminal. It didn't take very long for South Korean Police to catch up with Canadian thugs in South Korea during the Olympics. Perhaps we could learn a little from them.

The concept of a "nation state" traces back to the Treaty of Westphalia, Anon. It certainly is broad enough to include a monarchy, especially a constitutional monarchy.

I generally agree with the authors , but i think there is an underlying assumption about democracy (and specifically liberals one ) which can be summed in the Fukuyama thesis ( end of history -liberal democracy are the final form of human political work) , this assumption must be assessed or it may appear that liberal democracy has lived it usefulness and attempt by many to discard it , i am a supporter of democratic system, but we have to stay vigilant and critical if it to have a future.
One part i disagree with authors is the way they characterise it as lone figure who corrupt and hijack the institutions while a more accurate assessment is general failure of the political class and loss of faith among the common people , that open the road for them .