I've About Had It With Amerika 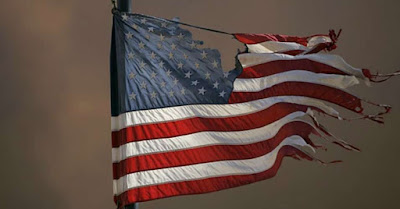 Wayne La Pierre, Dana the Douche Loesch, the NRA and seemingly unstoppable plague of school mass killings, America's malignant gun culture, Donald Trump, Steve Bannon, FOX & Friends, Hannity, Limbaugh and Alex Jones, Sarah Palin, every goddamned Tea Partier and all the mangy nags they rode in on, Paul Ryan and the reptilian Mitch McConnell, their "bought and paid for" Congress and corporatist Supreme Court, the Koch brothers, the Coors and the rest of the Billionaire's Slime Club, ExxonMobile and Monsanto, Judge Roy Moore and his wannabes, the greasy pocket-lining, kid-diddling televangelists with the sexual appetites of goats, the White Supremacists, Nazis and the Klan, NAFTA,  and the Pentagon with its wars without end - on and on and on - I have had it to the tits with all of them, the lot.

There's no easy or effective way, no "safe distance" to watch the garbage unravel. There's so much of it that it operates with the same pathology as a highly contagious disease. There's an inescapable smell of decay to it. America is rotting out from the inside.

There are many sane, kind and, yes, wonderful Americans, better than half I suspect. Yet they're losing their America to those who want to transform it into Amerika.

Ask yourself this: how does this end?
Posted by The Mound of Sound at 2:44 PM

The part that scares me is that as Global Warming creates Gulf States refugees Amerikan good old boys will surge north armed to the teeth and storm across the border looking for a new Alamo. Canadians are still living in the dream of the world's longest undefended border and we are totally unprepared for this. In previous attempts to annex Canada First Nations warriors saved our butts for which in gratitude we rounded them up and stuffed them on reservations. Do you think they would defend us again? Justin and his cohorts won't.


"The salient fact of American politics is that there are fifty to seventy million voters each of whom will volunteer to live, with his family, in a cardboard box under an overpass, and cook sparrows on an old curtain rod, if someone would only guarantee that the black, gay, Hispanic, liberal, whatever, in the next box over doesn’t even have a curtain rod, or a sparrow to put on it.”

.. I have high hopes
As we roll toward April 20 and a continent wide school walkout.. I suspect the lunatics losers will leave their couches. However, the casbah will be rocked. Collision a comin down the pike folks.. hearts and minds collide with h the mindless dead heart rascists & supremacists.. This won't be pretty. Open carry states.. How do you think that will work out? Droogs with guns confronting hordes of high schoolers. Does anyone think parents won't jump in?

Meanwhile, America has el presidente del Trumpo opining on arming oh mebbe 20% of the select teachers.. to repel - shoot dead - all bad mens.. Beyond laughable, blowing past hysterical.. off he sails into the great nowhere. Can't wait to hear from his brave trophy huntin children and the Huckabee Sanders lass with the cool eyebrow. Mebbe Paul Ryan will emerge from the crypt too.

America is running on fumes.. and food stamps. Waging war.. or at least have troops, in what.. some 70 or so countries? I can't recall the most recent 'Defense Budget' but quite certain it was lots n lots of BILLIONS.. daily. When you fuel up an aircraft carrier the bunker fuel or uranium bill aint cheap.. and holy hell, those midshipmans can put away food!

Maybe America will come to its collective senses.. but only because a bunch of high school kids realize they can be in charge.. because the 'adults' sure as hell forgot how.

Anyong....Toby...I totally have thought that in the past and continue to think in this vain....yes...what if all those xxxx's head north. Alberta will love it and welcome them with open arms. Perhaps our First Nations will emerge as our savior.