It's No Wonder They're Pals. 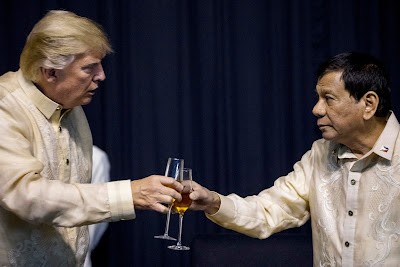 Donald Trump and Philippine president, Rodrigo Duterte, seem to like each other - a lot. Trump just has a baked-in fondness for his fellow despots. They're like peas in a pod.

It's not entirely clear that Duterte was inspired by Trump when he announced that his soldiers should shoot female rebels right where Trump is fond of groping women.


Duterte, a former provincial mayor, told a group of former communist rebels to “tell the soldiers…there’s a new order from the mayor. We won’t kill you. We will just shoot your vagina.”

“If there is no vagina, it would be useless,” he said, appearing to imply that women are useless without their genitals.

The President’s Communications Office included the comments in the official transcript of a speech but replaced the word “vagina” with a dash.

Crude and vulgar rhetoric for both men is no longer said behind close doors.As a woman I find both of them repulsive. The larger political goal is that the U.S. is militarily once again going into the Phillipines, to control more wealth for their corporate elite. There are 2 areas in the phillipines that have extensive mineral wealth, just waiting to be plundered, each one worth approx. 580B to a trillian dollars. I think the U.S. calls this latest military Imperial invasion, "Project Eagle." or something like that. Their pretext is that they are helping Duteret fight terrorism.

I think Trump becoming president has nothing to do with Americans being angry. I think it reflects a more fundamental cause in their culture. The antiintellectual, dumming down of the American mind, that's been going on for years is at such a low level that many Americans do not even know how to think. Only a culture that is shorn of conceptual thought would make Trump their president. A mindless,dangerous, vulgar misogynist, with a profound inferiority complex who is almost totally manipulated by the the deep state. I fear how this will end!


I too believe that a large segment of the American population has been conditioned, what you describe as dumbed down, through a collaboration between the political caste and America's mass media.

This much came through a 60 Minutes interview with two senior Republican communications operatives who brazenly outlined how John Kerry was"swiftboated." An utterly fictitious narrative was launched about how Kerry was not a hero in Vietnam but, in fact, a coward.They revealed how they shoehorned that into the American consciousness by first launching it in the open mouth radio shows - Limbaugh, Alex Jones, etc. It was then advanced to the second tier, the cable media, notably FOX. By force of constant repetition the story advanced to the top tier, the mainstream media which, by simply referencing the story gave it foundational truth in the public mind. That's nothing less than a form of public brainwashing. It worked on Kerry, it still works today. Since Kerry's era this has expanded powerfully through social media where an alarming segment of the American population get their 'news.' It heralds a collapse of logic, discernment, and critical thought, all displaced by innuendo, conspiracy theories fear mongering and blatant appeals to the target audience's basest instincts.

As for Duterte and Trump, I hope that all decent people would find the pair repugnant. That said a good many American women stubbornly support Trump no matter what.