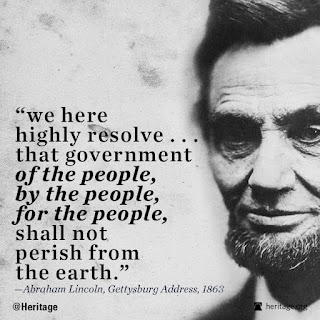 It truly was a death of a thousand cuts. It was years in the making and, when the heart stopped beating, few even noticed, fewer still cared.

Thom Hartman traces the slow but eventually fast collapse of the democratic state and its incremental displacement by today's oligarchy.

But you might scoff and point out that Americans still have elections, they still get to vote. It is the ballots that American voters cast that determine who will go to Washington to govern the nation. In a perfect world, sure. In today's America that's a dangerously fanciful notion.

A vital democracy depends on an informed electorate able to vote freely. The people who killed off American democracy had those very elements in their gun sights. They knew that a misinformed electorate suitably manipulated were the keys to manufactured consent. The private sector had mastered those techniques for decades. Watch a teenager roaming a mall in a trance, riveted to his smart phone, engaged in text messaging and social media, and you'll see it at work.

When Donald Trump got elected it heralded the passing of the canary of democracy.

The billionaires doing the seizing of our nation just didn’t come out about it until the presidency of Barack Obama, when the Koch Network, Adelson, the Mercers and the Waltons all became openly, and in some cases braggadociosly political in their “giving.”

...The American Legislative Exchange Council was founded in 1973, right after Lewis Powell’s memo – suggesting a propaganda program to promote the interests of big business and the rich – began circulating through top corporate and high-net-worth circles. That year, too, the Heritage Foundation was created. And in 1977, Charles Koch and friends founded the CATO Institute.

While the efforts of these groups have been multifaceted, their most obvious and deadly impact has been on the ongoing proliferation of weapons of war in America, and the denial of healthcare to millions in so-called red states. With the installation of Reagan, big business and billionaires were finally to get the tax breaks and other goodies that they wanted from Congress and the Executive Branch, while waging war on unions and working people.

But to Lewis Powell, a lawyer by training and the author of the infamous blueprint for billionaires to take over America (now known as The Powell Memo), nothing was more important than targeting the courts.

The Rise of the Corporate State

In the 1970s, as the US Chamber of Commerce focused on the courts, employing high-priced, savvy lawyers, and flooding the Supreme Court chamber with amicus briefs, a string of explosive decisions throughout the decade gave the #MorbidlyRich what they needed to eventually overthrow FDR’s New Deal and to radically reinterpret the 2nd Amendment.

In 1976, in Buckley v. Valeo, the Supreme Court (which Nixon appointed Lewis Powell to in 1972, the year after Powell wrote his infamous memo) ruled that political money is constitutionally protected free speech, changing American law so that those who have the most money would have the most “First Amendment free speech” in our political system. And if there was anything that the NRA was getting good at, it was raising money from weapons manufacturers and others.

That same year, in United States v. Martin Linen Supply Co., corporations – as persons – were given Fifth Amendment protections against double jeopardy, limiting the ability of citizens to go after gun manufacturers, among others.

And in Virginia State Board of Pharmacy v. Virginia Citizens Consumer Council, the Supreme Court ruled that corporate advertising (including promoting M15 weapons of war to our kids) is a protected form of free speech. (Ironically, William Rehnquist was the sole dissenter; he argued that corporate “speech” [advertising] was often deceptive. But the deed was done; Caveat emptorbecame the new American normal.)

The Oligarchs Move In For the Kill

Then came the Federalist Society, founded in 1982 with millions of dollars in funding by the Koch-connected Bradley Foundation.

They built a nationwide network of jurists, attorneys, legal scholars, and politicians to indoctrinate a new generation’s legal system with billionaire-friendly interpretations: Corporate personhood is real, money is speech, democracy is not sacred, and organized money should always have privilege over organized people.

They also helped lay the case for the Heller decision, which, for the first time in nearly 230 years, found a “right to individual gun ownership” in the 2nd Amendment.

In 2010 the Supreme Court wrapped its gift to corporations and gun manufacturers all up in a neat little bundle with their 5-4 Citizen’s United ruling. With that decision, America was nearly completely turned over to the wealthy and corporations.

Thereafter, oligarchs like Adelson and the Kochs began openly bragging about how much they were spending to buy politicians, legislation, tax breaks, and the deregulation of consumer protections.
...

And so, a few days after Paul Ryan shepherded through Congress a law that confers potentially billions of dollars in tax benefits to them, the Kochs and their friends put a half-million dollars into Ryan’s fundraising committee, while the NRA continues to shower him and Mitch McConnell with support.

In 1971, only 175 companies had registered lobbyists. By 1982, there were nearly 2,500, and today there are over 12,000 lobbyists just registered in DC. Oligarchs were dumping huge amounts of money lobbying for favorable legislation, although it still isn’t really visible to most Americans until tragedies like mass shootings give us an insight into how it all works.

As the Reagan administration rolled into power in 1981, so, too, did the #MorbidlyRich oligarchs, who were seeding brand-new right-wing think tanks devoted to espousing the same free-market, Andrew Mellon/Warren Harding ideologies that led to the 1929 Great Crash: massive tax cuts, deregulation, and privatization.

The Age of Graft

For example, can you imagine Richard Nixon lying about how environmentally destructive some industrial poisons are? Nixon couldn’t imagine it; he put into place the Environmental Protection Agency. And he was fine with the fairly strong gun control laws that several states, from California to New York, had in place.

But today’s Republican Party (with a few very, very rare exceptions) is so in debt to – so owned by – a few petrobillionaires and coal multimillionaires and oil companies that they’re perfectly willing to look the world in the face and lie through their teeth about the science of global warming.

They’re so fully-owned by the gun lobby/NRA that they’ve made it illegal for the US government to do any meaningful research into gun deaths; they’ve banned doctors, in a number of states including Florida, from even asking kids if there’s a gun in their home; and McConnell and Ryan have successfully prevented any sort of meaningful legislation to restrict guns from getting a vote even when they know it would pass.

"Now it’s just an oligarchy, with unlimited political bribery being the essence of getting the nominations for president or to elect the president. And the same thing applies to governors and U.S. senators and congress members. So now we’ve just seen a complete subversion of our political system as a payoff to major contributors, who want and expect and sometimes get favors for themselves after the election’s over. The incumbents, Democrats and Republicans, look upon this unlimited money as a great benefit to themselves. Somebody’s who’s already in Congress has a lot more to sell to an avid contributor than somebody who’s just a challenger."

Fixing It Won't Be Easy

The most effective way to solve this problem is to pass a constitutional amendment that will proclaim, clearly and unambiguously, that corporations are not persons and that money is not “free speech.” Groups like MoveToAmend.org and Public Citizen have been working on these campaigns for years, and they’re bearing fruit.

Once the power of money is stripped from our political system, the power of gun manufacturers through the NRA will largely evaporate.
...

The NRA’s essentially outright purchase of senators like Richard Burr ($6.3 million in 2016), Marco Rubio ($3.2 million in 2016), Roy Blunt ($3 million), and Rob Portman ($2.2 million) – and Donald Trump ($30 million in the presidential race) – is so obviously corrupt to many of the students in Parkland that they’re furious.

He's right. A constitutional amendment should do it only it would have to survive a thoroughly "bought and paid for" Congress, a undemocratic and unscrupulous White House and an effectively corrupted Supreme Court.

A constitutional amendment should do it but it is unlikely. As long as working people are able to squeak by while terrified of losing to the hungry poor things will continue as they are. America looks pretty much as it did during the days of the robber barons. It took two world wars and a depression to convince enough people that real change was necessary. It will take equally massive challenges to again stir the American people to take control of their government.

Part of the problem is religion. Belief in the fantastical is a direct response to overwhelming stress. Religion almost always sides with the power structure. Removing the oligarchy will first require taming the religious.

One more thing. Free speech does not mean it's okay to get on the radio or TV and spout lies 24/7/52. Yes, people can think what they want but there is no need to give demagogues a microphone and a wadge of money for using it.


I agree, Toby, it's not going to happen. That's the thing with political capture. Once they've got you, they don't let go. This has been 20, 30 years in the making.