Well that Explains It. How, Yet Again, Little Norway Kicks the World's Ass. 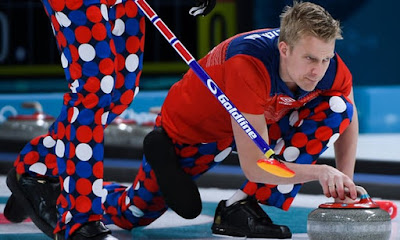 It has a population way smaller than the Greater Toronto Area's 6.4 million. Norwegians come in at just 5.3 million.

It's a country of many truly remarkable "firsts." Longevity, standard of living, quality of life and more. It also has the world's largest sovereign wealth fund. Unlike Alberta, Norway didn't squander its oil wealth.

Now people are asking how Norway is kicking everyone's ass at the winter olympics. USA Today went in search of the answers.

And ironically, for a country that’s been winning everything here, Ovrebo believes much of the success traces back to its disregard for the scoreboard with younger athletes.

Unlike the U.S., where we keep score of everything all the time, Norway puts kids in sports but doesn’t let them keep score until age 13. The idea is to make sports part of their social development so that the motivation to stay involved is to have fun with their friends, not winning.

Eventually, of course, the Norwegians introduce competition and the most advanced sports science techniques they can develop to pump out their medal-hoarding biathletes, skiers and ski jumpers. But the idea, Ovrebo said, isn’t to have the highest-ranked 10-year-old athletes in the world but rather the most mature adults.

“A huge amount of Norwegian kids are doing sports, so we have very broad recruiting base, and our top sports programs and our kids are very closely connected in our system,” Ovrebo said. “They can compete, but we don’t make like No. 1, No. 2, No. 3 before they’re in their 13th year. We think it’s better to be a child in this way because then they can concentrate on having fun and be with their friends and develop. We think the biggest motivation for the kids to do sports that they do it with their friends and they have fun while they’re doing it and we want to keep that feeling throughout their whole career.”\

And fun remains a key tenet of the Norwegian experience even when they grow up, which is important since, as Ovrebo acknowledges, “it’s not a very competitive society from the start.” In other words, Norway doesn’t look at sports as an avenue to fame and fortune, nor is it an escape from their troubles. Because most Norwegians, it turns out, don’t have many troubles given the universal health care, free college education and high employment rates.

“We have quite a high level of life quality for a very high percentage of the people and that puts them in a position where they can actually choose sports as a kind of self-realization and development arena,” Ovrebo said. “They’re not struggling for their lives, so they’re quite free and quite educated and have good health state. That means many of the youth are actually in a position where they can choose sports.”

Yeah, it makes sense. You know it does.

And, get this. Norway withholds the weight of its athletes out of sensitivity to weight-related disorders. How tall is Svend? He's 6'2". What does he weigh? None of your damned business.

Question is can immigrants from Norway improve the US? Trump seems to think it would be a good idea, but they're not having it, why leave an awesome country like Norway for a shithole like the US has become?


Hey, BCW. Trump's remarks led to Norse being polled about relocating to the United States. Apparently they're not keen to emigrate any time soon. Nobody can figure out any good reason to trade Norway for America.

Hey!......Norway used Peter Lougheed's policy regarding royalties regarding oil....which Lougheed's policy was not passed. And, people from the Scandinavian countries don't immigrate to other countries. Who was it again who shows positive to drugs while playing Curling...a Russian I believe?


I don't understand your remarks, Anon. "which Lougheed's policy was not passed." What does that mean. And where did you get the idea that Scandinavians don't emigrate. You might have a hard time persuading the good people of Minnesota and Wisconsin on that one. And what any of this has to do with a Russian curler caught doping is completely beyond me.

Not passed in Canada while Norway implemented it.