No. It's Never a Good Time for This 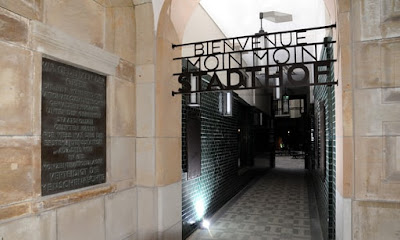 "Welcome to Lubyanka Plaza where residents can enjoy every amenity
including our luxurious basement fitness centre."


The relatives of some of the thousands of Nazi victims who were tortured and murdered in the Hamburg headquarters of the Gestapo have accused authorities and property developers of insulting their memory following the transformation of the building into a luxury complex with scant reference to its past.

The Stadthöfe (city courts) in the centre of the German port city, has been marketed under the title Hommage to Life by its owners, Quantum Immobilien.
...

“Nobody who was brought here for interrogation came out unhurt,” said Detlef Baade, whose father was tortured by Hamburg’s Gestapo in 1933. “We have a societal obligation to do this. We owe it to the dead,” he told the Süddeutsche Zeitung.

Protesting under the slogan “Commerce instead of Commemoration? Never!” the demonstrators also brought attention to the wrought-iron greeting over the entrance to the Stadthöfe, which they say is chillingly reminiscent of the Arbeit Macht Frei slogan at Auschwitz and should be removed. The greeting reads: “Bienvenue (welcome) /Moin moin (a colloquial phrase for hello)/ Stadthof”.
Posted by The Mound of Sound at 10:53 AM


It's pretty gruesome, isn't it TB? Imagine passing through an entryway where you know hundreds of terrified victims were dragged to endure torture and murder. It's a luxurious charnel house.

The building should have been demolished.


Yes, once its evidentiary worth had been exhausted it should have been razed. You might have thought the regional and municipal authorities would have demanded as much.