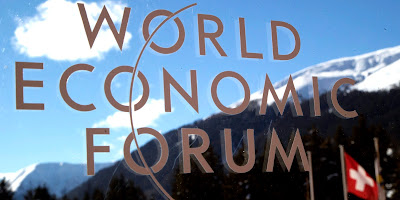 Around the world but especially in North America, governments have adapted to the neoliberal order, globalism, by focusing on short-term growth even while imperiling our future generations.

As far back as 2006 I've been writing posts warning of our governments' failures to incorporate posterity as an integral component of policy and planning. There is no real prosperity that doesn't accommodate the role of posterity.  Without posterity it's a Potemkin village.

More voices in recent years have joined the chorus calling for the revival of posterity. Now it's the World Economic Forum, the Billionaire Boys' Club of Davos, joining the ranks.

Davos, the place where the man boy in polka dot socks goes to preen. The World Economic Forum has released a damning report warning young people that their governments' focus on short term growth is failing their generation and those to follow.


The global obsession with short-term growth has led to historically high levels of income inequality and a growing gap between old and young people, according to a damning new report by the World Economic Forum (WEF).

In a surprisingly stark warning about the impact of short-termism, the WEF calls for a new way of assessing national accomplishment beyond gross domestic product (GDP), a measure it says fuels increasing income and wealth inequality.

Based on an analysis of its annual Inclusive Development Index (IDI) that focused on 11 measures of economic progress (in addition to GDP) for 29 developed countries, the WEF report warns that both rich and poor countries are failing to protect future generations – highlighting high levels of public debt and economic drivers that depend on a high rate of carbon dioxide emissions as two key factors.

Even in countries with the strongest economic growth in terms of GDP, such as the US, the report found evidence of “inclusion” (where increased wealth and opportunity is being shared more widely) to be lacking.

Out of the 30 nations in Canada's group we placed a thoroughly mediocre 15th. Our report card is here.

As I wrote this post it reminded me of a passage from James K. (son of John K.) Galbraith's book, The Predator State, that speaks to posterity and planning and the pitfalls of prostrating our societies to "the market."

A country that does not have a public planning system simply turns this function over to a network of private enterprise - domestic or foreign - which then becomes the true seat of economic power. And that is why the struggle over planning is, and remains, such a sensitive issue: it is a struggle over power. It is a struggle not between democracy and the corporation, but between those - scientists, engineers, some economists, and public intellectuals - who attempt to represent  the common and future interest and those - banks, companies, lobbyists, and the economists whom they employ - that represent only the tribal and current interest. It is an uneven struggle.  It is a struggle in which, outside of wartime and the zone of permanent planning called the Pentagon, the planners have prevailed only on rare occasions, notably during the Great Depression. But it is an inescapable struggle. If the future is to be provided for, you must have a community of planners, and some way must be found to support them, to permit them to develop their plans and resolve their differences, and to give them access to the levers of power. To walk away from this problem with a shrug about "markets" is to disenfranchise the future. To enable planning guarantees nothing. But to "rely on the market" is to guarantee that the interests of the future will never be provided for.
Posted by The Mound of Sound at 12:31 PM

Our leaders are navel gazers, Mound. Their vision doesn't stretch beyond the next quarter.


They really have a short-term obsession measured by the next electoral cycle, Owen. They put their personal political fortunes ahead of the wellbeing of the country and our people. The next generation means very little to them and the one after that, virtually nothing.

Trudeau is always the mediator. He always wants everyone to be happy. Sunny Days! and all that. I imagine that after Chrystia Freeland hammers out a renewed NAFTA that Canadians can live with Trudeau will feel sorry for Trump and give the game away.