Climate Lemmings. You Either Are or You're Not.


I think very few among us have any realistic idea of how far down the climate change road we've already gone. That includes our political leadership. No question about that.

It's hard to keep track of what's going on even a couple of thousand miles away much less in more distant corners of the world. It takes work and an investment of time that could be put to other uses to stay on top of what's happening. TV news isn't going to keep you up to date even when they do have dramatic pictures.

Pretty much all of us are living in some form of climate change anomaly. We've got ours out on the Pacific coast. Follow that coastline a couple of thousand miles south and they've got a somewhat different anomaly. My relatives in eastern Canada are dealing with their own climate anomaly. Ditto for every other continent and regions within those continents.

Temperature fluctuations are one area of climate anomaly. We've just had another mid-winter, dark of night, temperature anomaly in the high Arctic where it's been some 25 degrees Celsius hotter than normal - above freezing. Eastern Canada has had some bitter winter conditions. It spread into the American eastern seaboard too.

It's chaotic, schizophrenic in a way. Washington, D.C. was freezing. Trump was mocking climate scientists, praying for a little global warming for the capitol. His prayers were answered. Wednesday saw the earliest 80 degree (F) day in the history of the US capitol. Here's a temperature map for yesterday from the US Weather Service. 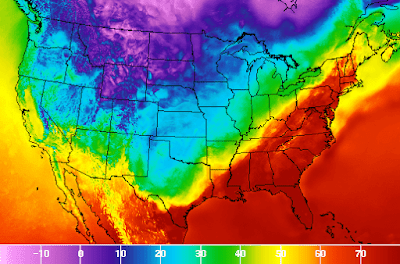 "What we have is a large-scale pattern that wouldn't be too uncommon in the spring," said meteorologist Patrick Burke of the National Weather Service. "But it's a little bit unusual to see it set up this way in February—and set up with such persistence."

Central Park hit 76°F. Boston had back-to-back 70°F days. Towns in Virginia and Vermont were pushing 80°F, with some Vermont towns warning residents that rapid snowmelt from the heat could cause a new round of flooding. In Pittsburgh, a high of 78°F beat a record set in 1891 by a whopping 10 degrees.

Some call this emerging pattern of severe fluctuations in formerly stable seasonal conditions "global weirding."  I think that's an unduly benign term, one that can lull us into the lemming-like state that seems to have taken hold of us.

The Potsdam scientists warned us this week that every five years of our ongoing failure to dramatically slash greenhouse gas emissions will translate into an extra 20 cms., 8 inches, of sea level rise by 2100 ("best case" scenario). These clear warnings cut no ice in Washington or Ottawa or any provincial capitol for that matter.

You don't have a cadre of climate scientists at your beck and call. The same can't be said for our prime minister and premiers. They've got experts at their fingertips if only they chose to receive what they needed to hear instead of what they wanted to hear or simply not near at all.

There is a trickle down effect. The lemming-like indifference among our top political leadership sets the tone for the general public. They can't build up our awareness of the impacts of climate change, our remaining options for mitigation and adaptation, and the urgency of taking action without exposing their own failures and so they're not even trying. And, by their self-serving indifference, they leave many of us more vulnerable to denialist arguments.

It recently emerged that we're just five years away from hitting what our government has proclaimed the "never exceed" point of global warming - 1.5 degrees Celsius.  Our government, however, acts as thought we've got twenty, perhaps 30 years (the lifetime of the Kinder-Morgan pipeline) before we have to worry about this.  The US Energy Department, meanwhile, projects there'll be no reduction in America's carbon footprint before at least 2050. They're expecting an emissions increase. Sounds like a safe bet. And ExxonMobil has assured its shareholders that the company is confident it will sell every last barrel of oil in its existing proven reserves and whatever new reserves it can discover in the future. This seems to be confirmed by the International Energy Agency's outlook to 2040 that shows robust growth in oil sales to 2025 and continued, albeit slower growth, in oil markets to 2040.

In other words, the petro-party is far from over and it's not going to stop for the foreseeable future.  Good luck.
Posted by The Mound of Sound at 12:28 PM

You paint a very grim picture here, Mound, and it is one I cannot disagree with. I think you are absolutely right when you talk about our government's abject failure to instill any sense of urgency in the people. It is one of democracy's saddest moments.

Like an approaching asteroid. "No, no, wait until it gets closer and easier to deal with. Maybe it'll miss us after all."

The oil producers and their economic ecosytem are entrenched and they will keep their product cheap enough to remain competative.
We may not have a bright global future but I tend to believe Lovelock's prediction that several technically advanced enclaves could survive.
Hoping to preserve where I live I attended a meeting downtown at SFU hosted by the Tsleil-Waututh tonight. Big things starting March 10.

The KM bitumen pipeline must be stopped.

.. its in The National Interest
and.. its Energy Security For Canadians
that we expand the pipeline, extirpate the Orca
and fuel the Economy of Asia via supertankers
with dilbit from the tar sands, where buffalo will soon roam
only after we frack the living daylights out of western Canuckville

When we clean up the tailings ponds.. visible from outer space
and aliens.. are watching us and watching lunatics
like Sean Hannity froth on our tv's


and Donald el Trumpo will 'take it with him'
there was no collusion.. we are tired of all the winning
and Alberta can't wait.. for Jason Kenney
who discovered The Alberta Advantage
and the North West Passage

Meanwhile us in Ontario are getting Patrick Brown
stuffed in our faces daily..

Everything is wonderfull.. in its own time ?
Mound.. I aint seeing the wonderful.. are you?