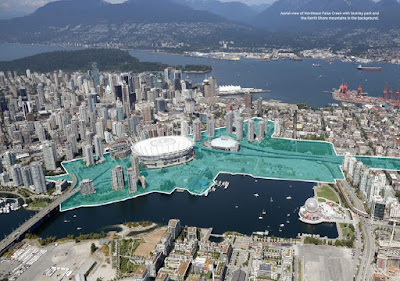 Conde Nast says Vancouver is Number One. Forbes has the city in second place, just behind Los Angeles. But whether Vancouver is the most traffic-congested city in North America or merely runner-up, it's a disgrace.

Vancouver has some baked-in problems, foremost among them are waterways - False Creek, English Bay, Coal Harbour. Five bridges - Burrard, Granville, Cambie, Lion's Gate and Second Narrows (iron workers). That's compounded by a traffic grid that hasn't met the city's needs since the early 80s. A lot of people who work in the city live in the burbs. They cross those five bridges, plus the bridges spanning the Fraser River, twice every workday. Choke points.

When I set up my first shop in the downtown core I could make it in ten minutes from my house to the parkade beneath my office tower. Today that can easily take you an hour or more.

But Vancouver is run by developers eager to profit from an influx of new residents, many of them with lots of money. They're in constant pursuit of places where they can slap up the next high-rise condo. And a complacent city council and bureaucracy is always ready to do their bidding.

Now they're planning a large scale redevelopment of the northeast False Creek area. Some are complaining that they'll lose their view of the majestic North Shore mountains. The response from city officials - "tough."

McNaney said urban design experts informed city staff that it would be difficult for Vancouver to achieve its urban design goals while preserving the view corridors.

He also said the three new towers will provide more variation to the skyline, as well as "a celebratory moment in the skyline where we can celebrate one of our biggest entertainment districts in the province of British Columbia."
Posted by The Mound of Sound at 10:05 AM

"Now they're planning a large scale redevelopment of the northeast False Creek area."

That's all flood plain. No problem. Global warming will take care of that.

Like most cities, the big problem is that too much land and priority has been set aside for automobiles. In the downtown core far more people travel by walking than cars but the latter have more space and privilege.

It is interesting looking at old pictures of Vancouver prior to 1950. The streets have more electric trams and interurbans than automobiles. There was interurban service all the way to Chilliwack and Steveston. Rush hour service to New Westminster rivaled anything Skytrain provides today.

One can go on and on about this and many have. The important thing is that if Vancouver is to become a livable city again it has to drastically reduce the automobile traffic.

Debt is growing every year, exponentially, so to maintain the debt/GDP and debt/capita ratios, both GDP and population have to grow every year. What a great strategy - mathematically impossible and ultimately suicidal.


Traffic is only part of the answer, Toby. Vancouver is rotting out from the inside. Every city needs a healthy demographic cross-section. You need waiters, labourers, and you need doctors and engineers. You need bakeries and gas stations, small and medium-size shops. This city is no longer able to support that cross-section.

It's becoming insanely difficult to find a doctor in Vancouver. When my GP wanted me to see a thoracic surgeon, it took less than two weeks before I was in her office. She was a recent graduate from UBC and VGH but she never had any intention of opening a practice in Vancouver. The real estate prices were ridiculous. She told me her classmates also routinely chose to practice anywhere but Vancouver.

Traffic is one of Vancouver's nightmares but just one.

Mound, I understand that Vancouver has lots of problems, cost of residence being high on the list. Hugh is right that perpetual growth is a big problem.

During the 1970s the Provincial government had a policy of decentralization which moved all sorts of services and development throughout the Interior and the Island. Somewhere in the late 1980s the government reversed the process. Times were tight and managers in Victoria and Vancouver protected their jobs by cutting in the Interior and the Island. The result has been a major population shift into the bigger centres.


Toby, I think there's a lot more to Vancouver's population growth than a few bureaucrats protecting their jobs. The immigration stats speak volumes. The first house I owned in Vancouver was in a neighbourhood of lovely two-bedroom bungalows. Working class people lived there with their well tended flower beds and gardens.

Those houses are long gone, in their place McMansions. A bare lot in that neighbourhood fetches well more than $2-million. Yet that same neighbourhood is the poorest in Vancouver on a declared income basis.Someone, a lot of someones, with pauper-grade incomes somehow owns those houses, many of which sit empty. Others have the grandparents and the kids, consumers of social and other services while the parents keep their business and money safely offshore.

That's the reality of today's Vancouver, Toby, and it has almost nothing to do with bureaucrats in Victoria or Vancouver's city hall.

Imagine if Toronto was bounded by mountains and the sea, Pamela. Toronto can still grow further northward and eastward. Land is not in such finite supply as it is in the Lower Mainland.

The rot you refer to is all encompassing. It involves all levels of government. Everything from management style to immigration to construction at all cost to turning Vancouver into a place where rich foreigners can launder their money through real estate and casinos. It's everything including too many cars, too many people and so called open for business plunder culture. The corruption runs deep. It may be legal but it's still corruption.

At this point, Toby, I don't see how it can be salvaged. The demographic change has created a wealth blockage that's beginning to impair basic municipal functioning. Ordinary folks who invested in small businesses - bakeries, car repair shops, the corner hardware store, etc. - can no longer sell their businesses as going concerns. The value of the land is prohibitive so they have to sell to developers for more condos. Just drive down Cambie in the Oakridge area to see the devastation. Once you lose those core support businesses that every community relies upon, what's left?

My prediction, Mound, is that business will abandon Vancouver and move to Surrey.

The answer is harsh. Chase the money out, and punish the speculators. Unfortunately, regular people would get hurt too (but the working and middle classes are already hurting, so they really wouldn't notice it anyway), but it's the only answer to this mess.

Raise interest rates to 20%, and reset the economy. The US got nearly twenty of prosperity out of that after Volcker did it (and don't acknowledge it, attributing their 'growth' to Reagan).

Russia's had a major bounce back since they raised rates to 17%.