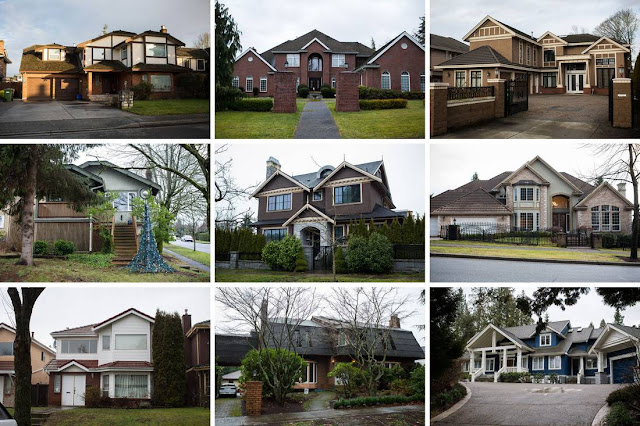 The Globe and Mail has a feature story on how well Vancouver's fentanyl bosses are making out and where they're laundering their money - in high priced Vancouver real estate. Check out the impressive photo gallery here.

It was dirty money – stuffed in the trunk of their Mercedes and behind a seat in their Range Rover. The rest was squirrelled away in a safe and a night table, at a condo they were using.

Small bills – $660,970 in all – covered with traces of deadly fentanyl and other street drugs. Police seized the cash in the spring of 2016, when they arrested Ying Zhang, Zhi Guang Zhang and Wei Zhang, after putting them under surveillance and watching them conduct business in parking lots in and around Vancouver.

They weren't charged with any crimes, despite the evidence that they were peddling opioids that kill people. It's not unusual in B.C. for police to forgo pursuing charges when they find dealers in possession of drug money, but not holding actual drugs. The Zhangs did lose their cash, though, for good: A judge ordered it forfeited to the provincial government as "proceeds of crime."

"Proceeds of crime." That's an apt description for much of Vancouver's toniest real estate, a phenomenon that has led to the displacement of the ordinary people who once lived in those neighbourhoods.

My old neighbourhood succumbed to this government-enabled malignancy. Originally it was a middle class area of cookie-cutter two bedroom bungalows from the 40s with neat lawns, well tended flower beds and a single car garage accessed from the lane in back.

If my neighbours and I had simply held on for another 20 years we could have sold our homes for easily ten and closer to 20 times what we had paid for them. Only, once the first McMansions went up, most of us didn't want to live with a monster house on either side. It looked so forlorn, a modest bungalow sandwiched between monstrosities.

As for the newcomers, it wasn't long before the druggies were knocking on their doors.

A Globe and Mail investigation has discovered that the Zhangs and other local residents associated with drug-related crime are effectively parking their riches in Vancouver-area real estate, where it is rendered clean and secure, without actually owning any of the properties.
...

Just as a bank does, they grant a loan, then register a land-title charge against the borrower's real estate, equal to the value of the debt, plus interest. The charge, which gives them a stake in the real estate, remains in place until the debt is cleared. If the property is sold, the loan gets paid out from the sale proceeds, in clean money, all seemingly legal.

Except these financiers are unregulated and unlicensed and the loans they grant are in cash, which is likely dirty money derived from drug deals or other crimes. The Zhangs charge interest rates of up to 39.6 per cent, with some private lenders demanding up to 120 per cent. Court records show that one of the Zhangs' associates is among those allegedly charging that extortionate level of interest, which is double the maximum legal rate.\

Their target customers are wealthy Chinese newcomers or tourists – and their grown children – who've bought property in Canada and who want to use it as leverage to borrow large amounts of cash, as they might with a home-equity line of credit, for gambling or other extravagances. Some borrowers appear to use the loans to pay down other debts.

Typically, their wealth is in China – money that can't easily be wired to B.C., because the Chinese government forbids its citizens from taking more than US$50,000 per year abroad. Most of the homeowners already have at least one mortgage with a Canadian bank, and may have maxed out their legitimate borrowing power in this country.

One of the Zhangs' customers was a real-estate developer, based in China, who has a gambling habit. Jia Gui Gao borrowed tens of millions of dollars – more than his B.C. properties were worth – from several private lenders. Then he simply walked away from $58-million worth of empty Vancouver-area mansions and vacant land he owned, leaving it all to his creditors.

Beyond the Zhangs, such private moneylenders in B.C. include Xun Chuang, who has a record of drug crimes; Vinh-Loc Chung, convicted for carrying a restricted firearm; Xiao Ju Guan, found storing ecstasy and other drugs; Ye Jin Li, convicted on drug charges; and Kwok Chung Tam, a long-time Vancouver lender who's been convicted of drug crimes. Mr. Guan also ran a business wiring cash overseas.

We've been setting ourselves up for this going back as far as Mulroney's days when the federal government essentially sold citizenship for a modest investment in some Canadian business of a couple of hundred thousand dollars. A lot of these "investor class" newcomers simply borrowed the requisite sum, invested it in some qualifying asset, i.e. a strip mall often owned by their immigration agent, paid interest on it for a couple of years and then, having met Ottawa's requirements, simply allowed their immigration consultant to recover the asset through foreclosure.

I was involved in looking into this scheme for the Law Society of British Columbia. It was as simple as doing a title search on a subject property and discovering that it had a different owner every two or three years and a history of being foreclosed back to the consultant again and again. As I understand it certain Law Society officials tried to give the information to immigration authorities for action but they didn't seem to think it was their problem.

Meanwhile my old neighbourhood is wrecked. Bare lot prices are well over $2-million. With a megaplex thrown up they fetch closer to $3-million. And yet, in terms of declared income, it's the poorest neighbourhood in the city. That's right. The people who are springing for those $3-million homes seem impoverished, destitute, at least if you don't count the house and those luxury cars that litter the curbside. Thanks Ottawa, thanks.

And what is fearless Justin doing to fight back? The only thing I've heard is his announcement on a visit to the People's Republic that he would be opening a slew of new immigration offices across China. Great, Justin. Great.

Most of the loans get paid back privately, and no one is the wiser. Once a loan is secured, with real estate as collateral, paying it back, under the radar, is simple. One long-time customer told The Globe that he and most other borrowers make their payments via electronic transfer from their bank accounts in China to accounts that the lenders hold, also in China.

"I can pay the money online on my phone," said the customer, whom The Globe agreed not to name, because he fears repercussions. He added that the lenders work in tandem with people who operate underground banks in China. "We all use our money in China to pay back … We don't have money here."

Those offshore payments are thus delivered to the lenders as clean money – beyond the reach of Canadian law enforcement.

The dubious transactions don't stop there. According to a recent operational alert from FinTRAC, Canadian-based drug-trafficking rings are using money laundered through China to buy fentanyl there. "Financial intelligence suggests that traffickers procure fentanyl, and its analogues and precursors, from overseas sources, mainly in China," said the bulletin. "Traffickers most often pay for these materials with wire transfers and money orders processed by money-services businesses."

Well, Justin, this makes you the latest in a succession of prime ministers who are or have been, through your dereliction, complicit in this enterprise.  Federal Liberals and Tories alike, along with the leadership of the provincial Liberals, have wrecked this city and allowed it to be turned into a money laundering machine for Chinese drug criminals and their fentanyl industry.

At some point Ottawa has to stop being British Columbia's scourge. From pipelines to money laundering, from solid neighbourhoods utterly ruined, to providing the essential foundation for foreign drug gangs and their racketeering, Ottawa keeps treating my province, British Columbia, as their plaything.

UPDATE: It's Better than Sleeping Under a Bridge

Also in The Globe - a report on Vancouver's new nomads. People who can no afford even rent in Vancouver and instead have joined a legion of people who now live on city streets in campers.

What a shit-show. Not sure why we should keep paying taxes to govt if it doesn't do its f#cking job.


I don't know if the experience has been better elsewhere but, for British Columbians, our federal government has done us few favours for a very long time.

Trudeau defends his Kinder-Morgan policy as part of a grand compromise he made with Rachel Notley. Yes, he compromised. He compromised us. That was his part of the bargain. He sold us out to Notley and he acts like that was a noble thing to do. Trudeau is a living, breathing, two-legged false flag.

When Quebec said a resounding "no" to Energy East, that was the end of it. When British Columbia said, wait a second, we need some straight answers, it was borderline sedition.

I would be content with British Columbia leaving Canada - in a heartbeat. It wouldn't be painless for B.C. or Canada but we would get by.

Canada is only a democratic federation if everyone is treated equitably. We are not. As far as Trudeau is concerned, British Columbia is free to do exactly as he says.