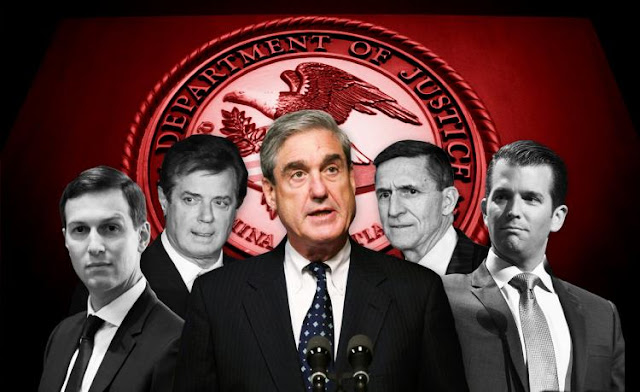 The indictments — part of Mueller's ongoing investigation — are the first criminal indictments tied directly to Russian interference in the 2016 election.

"From in or around 2014 to the present, Defendants knowingly and intentionally conspired with each other (and with persons known and unknown to the Grand Jury) to defraud the United States by impairing, obstructing, and defeating the lawful functions of the government through fraud and deceit for the purpose of interfering with the U.S. political and electoral processes, including the presidential election of 2016," the indictment states.

According to the indictment, some defendants traveled to U.S. under false pretenses to collect intelligence and to "reach significant number of Americans for purposes of interfering with the US political system, including the presidential election of 2016."

Now we wait for the other shoe to drop. That will be when indictments are issued against those "significant number of Americans" who colluded with the Russians. It's probably not going to be a pleasant weekend for Don Jr., a.k.a.
"Fredo" Trump, and Jared may be busy getting the lowdown from his dad on prison shower etiquette.

It's a shrewd move on Mueller's part. The grand jury indicts the Russians. It's announced on a Friday. A whole weekend to soak in. No one on Capitol Hill or in the White House will be rallying to their defence. Those Russian indictments then provide a solid anchor for the next tranche of indictments, the Americans with whom they colluded. If you're okay with indicting the Russians, you're going to have a hard time getting shirty when their American play pals get the same treatment.

.. I remember how stunned I was to awake and realize Stephen Harper had a majority 'government' & and I vividly recall seeing the sweep that gave him the boot. It was like walking on air, fresh air. Along came Trump.. and again I had to confront the demons.. so of course I will dance with the dawgs in the backyard on seeing that stinkin creep get taken down. I fear though, he will survive like the parasite he is, to end of term.. though ideally aiding and abetting as the 'but wait, there's more' total collapse of the GOP ..

We live in a new era Mound.. a 'political' era that reeks.. it rotting. You've described and defined so many aspects of it.. ie captured politics.. it makes the mind reel.. in dismay. It brings on vertigo.. nausea. Its probably why I wonder about totally deconstructing 'government' and 'politics' as we know it.. it serves not the citizens.. and is essentially toxic. Maybe I can just go back in my burrow for a week.. like a groundhog.. emerge into sunshine. Besides, I have the deathbed flu.. now into week 3.. optimistic but the sucker won't quit or let go.. In the immortal words of Van Morrison.. 'gotta get through January.. gotta get through February'... We gettin there.. to the gettin place..


Three weeks? Are you serious, Sal? With my heart issues I avoid public places as much as possible. I've become a "closing time" shopper, going in with my list, hitting an empty till and getting the hell home.

You're right. We are in an era of a distorted political reality that the citizenry no longer holds in check. Our political institutions may no longer be salvageable. We might, as you suggest, need to remedy the problem by "deconstructing" government and adopting new modes of organization - political, economic, social and cultural. To use Bill Maher's line, we're handcuffed to a dead hooker.