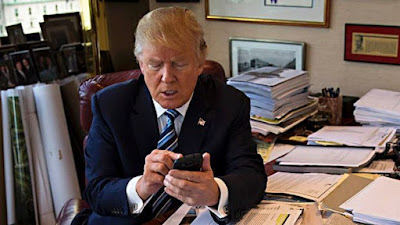 Has Donald Trump met his Twitterloo?

America's Buffoon in Chief loves his Twitter. He's become defined by his middle of the night/early morning tweets that he mainly uses to attack his critics. It's the way Trump chooses to speak directly to his base.

A chump as divisive as Trump will inevitably attract critics and those just out to mock him, the very thing Trump hates most. His answer has been to have his staff block anyone who  is less than loyal to his largeness.

A federal appeals court says blocking those who take the piss out of Trump is a violation of the US Constitution. A three-judge panel ruled unanimously that Trump can neither block those who criticize or mock him nor can he stop them from commenting on his Twitter feed.
Posted by The Mound of Sound at 10:09 AM

Finally somebody meaningfully reigns in the tRumpster, whew

now ... on to impeachment