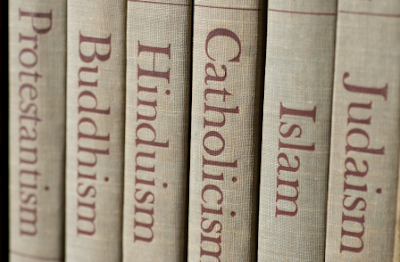 It's more than Bible-thumping but how much more?

As a devout agnostic my project for the next month will be to explore modern hyper-Christianity through the eyes of three writers: old school Republican, Kevin Phillips, author of "American Theocracy"; retired US military commander, Andrew Bacevich, "The New American Militarism"; and Kevin Kruse, "One Nation Under God: "How Corporate America Created Christian America."

Phillips book, published in 2005, offers a look at the role hyper-Christianity plays in American society, how fundamentalism overwhelmed traditional Christian churches and the role this evangelism plays in the decline of the great superpower. The author describes 'radicalized religion' as one of the three major perils facing America.

Reckless dependency on shrinking oil supplies, a milieu of radicalized (and much too influential) religion, and a reliance on borrowed money - debt, in its ballooning size and multiple domestic and international deficits - now constitute the three major perils to the United States of the twenty-first century.

[War and terror] both derive much of their current impetus from the incendiary backdrop of oil politics and religious fundamentalism, in Islam as well as the West. Despite pretensions to motivations such as liberty and freedom, petroleum and its geopolitics have dominated Anglo-American activity in the Middle East for a full century. On this, history could not be more clear.

The excesses of fundamentalism, in turn, are American and Israeli, as well as the all-too-obvious depredations of radical Islam. The rapture, end times, and Armageddon hucksters in the United States rank with any Shiite ayatollahs, and the last two presidential elections mark the transformation of the GOP into the first religious party in U.S. history.

From Bacevich we learn how the evangelical church along with the radical right managed to insinuate themselves into what we used to know as the "military-industrial complex." How was the US military reshaped by evangelism.


Certain in their understanding of right and wrong, growing in numbers, affluence, and sophistication, and determined to reverse the nation's perceived decline, conservative evangelicals after the 1960s assume the role of church militant. Abandoning their own previously well established skepticism about the morality of force and inspired in no small measure by their devotion to Israel, they articulated a highly permissive interpretation of the "just war" doctrine, the cornerstone of Christian thinking about warfare. And they developed a considerable appetite for wielding armed might on behalf of righteousness, more often that not indistinguishable from America's own interests.

Conservative Christians have conferred a presumptive moral palatability on any occasion on which the United States resorts to force. They have fostered among the legions of believing Americans a predisposition to see U.S. military power as inherently good, perhaps even a necessary adjunct to the accomplishment of Christ's saving mission. In doing so they have nurtured the preconditions have have enabled the American infatuation with military power to flourish.

Put another way, were it not for the support offered by several tens of millions of evangelicals, militarism in this deeply and genuinely religious country becomes inconceivable.


Did you ever wonder how “In God We Trust” came to be quoted on every American coin and dollar bill? Or why the Pledge of Allegiance to the most revered symbol of the nation includes an explicit declaration of confidence in the Almighty? Or why the president and members of Congress host a National Prayer Breakfast the first Thursday of each February?

These now utterly commonplace markers of public piety were almost all created during the same decade — the 1950s. Their initial enthusiasts, as described by the Princeton historian Kevin M. Kruse, were conservative Protestant ministers and businessmen who hoped Americans would not take their handiwork for granted. They believed the nation badly needed a religious awakening to reverse the depredations of a godless federal state.

“Every Christian should oppose the totalitarian trends of the New Deal,” asserted James W. Fifield Jr., an eloquent Congregationalist pastor from Los Angeles who, during the 1930s, created Spiritual Mobilization, a publicity offensive that joined megachurches like his with vocal, anti-liberal magnates like the Hollywood producer Cecil B. De Mille and J. Howard Pew Jr., the president of Sun Oil. They all believed religiosity, if widely and officially deployed, would be a mighty weapon in the battle against collectivist liberals at home and Communists abroad. As their ally, Billy Graham, preached in 1951 at one of his ever popular crusades, Americans urgently needed to rededicate themselves to “the rugged individualism that Christ brought” to the world.

But a funny thing happened on the road to spiritual and political redemption. By the mid-1950s, officeholders and social activists from every point on the ideological spectrum had signed on to the same righteous platform. In 1952, just before moving into the White House, Dwight ­Eisenhower (who was named after Dwight Moody, the renowned Gilded Age evangelist) told a gathering at the Waldorf Astoria: “Our form of government has no sense unless it is founded in a deeply felt religious faith, and I don’t care what it is.” Only a hardened atheist could object to such an ecumenical bromide. Under Eisenhower, Kruse writes, “the state no longer seemed ‘pagan,’ . . . and liberals could present themselves as acting in accord with God’s will too.” Two years later, when Congress agreed to add “one nation under God” to the Pledge, not even the American Civil Liberties Union objected. One lone Jewish representative from Brooklyn, Abraham Multer, did argue that putting God’s name on the currency would not stimulate “one single person to be more religious.” But even he didn’t dare vote against the bill.

I'll be dusting off my copies of Phillips' and Bacevich's books. They're around here somewhere. "One Nation Under God" should be here in a couple of weeks. I'll be back with more once I've brushed up on the first two and read the third.

Thanks for the history. I thought the “one nation under God” was purely an Eisenhower thing and had no idea of the background to it.

.. look forward to those reports and analysis Mound ..

In my view, the mayhem, degredation
even outright civil war facing Americans
is cause for Canada to quietly but briskly disengage...
steer for clear air, calm waters.. politically & diplomatically
The United States is in BIG trouble.. it iself.. internally, morally
Ideally, Trump crashes & burns over Epstein, or Russia
or out of sheer depravity & deceit.. humilated via Robert Mueller

.. Can't wait..
but why we trifle or tolerate Trump & GOP.. the religious factions boggles me

As you work your way into this article Mound..
you'll see why I sent it along .. on coming across it
ties in (sadly) to your topic ..

I'm interested too, Mound. My maternal side were all Brits. On one side they were from greater London and connected to trade on the Thames, one being a successful brassfounder and most of the rest worked on the river itself. The other side were educated, mostly in law and accounting. As they were not members of the Church of England (Anglicans) they were called Non-Conformists. Because they were not of the official church, they were buried in separate cemeteries, one of the most popular being Abney Park. On my paternal side, my father came to Canada as a young fellow along with his and siblings to escape the religious horror show that was Northern Ireland. This family background really shaped my attitude regarding all organized religion (which my father referred to as a dreaded disease) especially once my paternal grandmother changed from her Presbyterian beliefs to full blown Evangelical.

I do look forward to reading your comments on this subject as you embark on this exploration. Cheers!

I've noticed that a lot of the God shit that's being tossed around lately in my part of the country is coming from new Canadians.
JC the "rugged individualist" always gave me a laugh. My grade eight teacher, one of the best I ever had, was run off the claim for suggesting that the "Son of God" might have agreed with some of the Communists' ideas when the Baptist girl squawked to her parents. Once he'd made mention of JC and Communism in the same paragraph, I guess she just stopped listening. He'd gone on to run down the naïveté and idealism of the Reds by describing the practical application of those ideas in some shithole communes in Southwestern Ontario that he'd either observed or heard about as a teenager in the thirties.

Religion is becoming increasingly problematic.
That said should you or I take religion to task you will immediately be accused of being anti christian, anti semitic or islamophobic.

I have no problem with people believing in the great spaghetti monster in the sky.
I also believe we should have freedom from religion.
Being free of religion is becoming increasingly difficult.

When the United Church of Canada calls one of its congregation "Mentally Ill", for suggesting the pouring of water into the barrel resulted in more wine from all the sludge in the bottom of the barrel. And now that poor person has gone from being mentally ill to schizophrenic, causing that person to be considered untrustworthy within the community, it is nothing but a breeding ground of gossip and this brought about by well educated people including a Judge within the Congregation.

I know what you're describing, Lulymay. Mainly Presbyterian and Lutheran on my team but a couple who drifted to the Methodists.

I don't know if radical Christianity insinuated itself into the apparatus of the state or if it was co-opted in as a useful tool of the far right. I'm hoping Kruse's book sheds some light on that.

@ John.B - Like you, I'm of that generation that was indoctrinated to see capitalism, democracy and Christianity as inseparable. It was our way of life just like watching Disney on Sunday nights.

Christianity, in its purest iteration, is plainly socialist but that's where some sects chose to gloss over the great distinctions between socialism and godless Communism. Evangelism walks hand in hand with capitalism and doesn't examine it very closely.

Sal, thanks very much for the link. I had been too busy to read it until just now but it's an important and powerfully written piece.

I'll read it again once I've gotten through that new book.