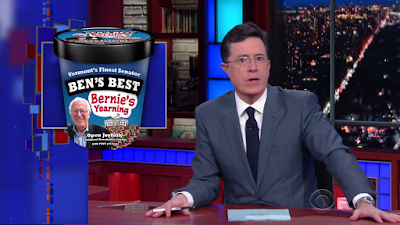 Left of Republican (LoR) is a term that describes the establishment Democratic Party. Their candidate is Hillary Clinton. She is the establishment candidate. Hillary's most important quality in this election is her gender. America has gone too long without a woman in the White House. Too bad the first woman to have a decent shot at it is Hillary.

No matter how she pretends otherwise, Hillary is not a progressive. That's not how she rolls. Think of her as America's Rona Ambrose if Ambrose was smart - which, by the way, she isn't. Hillary is the LoR candidate.

Then there's a Progressive who is challenging LoR Hillary for the Democratic nomination. That would be Bernie Sanders. The senator for Vermont is considered a radical left winger which really just shows how far America has drifted to the radical right. It's telling that policies grounded in basic decency and fairness are denounced as radical.

.. Canadian politics include winners, losers & complete asshats ..
more n more making it up as they go..

Shall we talk about Journalism or Mainstream Media ? NEB ?
See all the above ..

Repeat or holler 'Canadian Values' !
And hum oh canada
while plunging off cliffs with rest of the lemmings

The senator for Vermont is considered a radical left winger which really just shows how far America has drifted to the radical right.

America has drifted!!
Canada marches along with that statement step by step.
Read the columnists in any Canadian rag; better still read the comments of those rags and you will see no difference between the Canadian and America contributor.
Canadians are no better informed upon current events than their US counterparts; they just pretend to be superior.
The Brits are no better; perhaps it's an Anglo thing.

IT"S A GREED THING YOU FUCK
ING MORON anon906 !
.After reading and thinking about your drift ,, It is so obvious that you are so dumb(that your picture appears next to the definition of stupid and dumb). You also sound very rascist!!