How We Choose to Be Governed 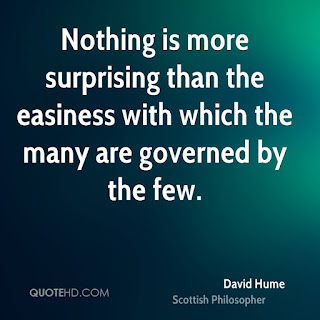 There was a time when we understood and embraced certain core principles of how we should be governed. Neoliberalism has strived to extinguish these values and erase them from our collective memory. The neoliberals, the corporatists, the market fundamentalists and the oligarchs have come perilously close to achieving their goal. Read this stuff and see if it rings any bells:


Of that generation of men to whom we owe so much, the man to whom we owe most is, of course, Lincoln. Part of our debt to him is because he forecast our present struggle and saw the way out. He said: —

“I hold that while man exists it is his duty to improve not only his own condition, but to assist in ameliorating mankind.”

...In every wise struggle for human betterment one of the main objects, and often the only object, has been to achieve in large measure equality of opportunity. In the struggle for this great end, nations rise from barbarism to civilization, and through it people press forward from one stage of enlightenment to the next. One of the chief factors in progress is the destruction of special privilege. The essence of any struggle for healthy liberty has always been, and must always be, to take from some one man or class of men the right to enjoy power, or wealth, or position, or immunity, which has not been earned by service to his or their fellows.

...At many stages in the advance of humanity, this conflict between the men who possess more than they have earned and the men who have earned more than they possess is the central condition of progress. In our day it appears as the struggle of freemen to gain and hold the right of self-government as against the special interests, who twist the methods of free government into machinery for defeating the popular will. At every stage, and under all circumstances, the essence of the struggle is to equalize opportunity, destroy privilege, and give to the life and citizenship of every individual the highest possible value both to himself and to the commonwealth.

...Now, this means that our government, national and state, must be freed from the sinister influence or control of special interests. Exactly as the special interests of cotton and slavery threatened our political integrity before the Civil War, so now the great special business interests too often control and corrupt the men and methods of government for their own profit. We must drive the special interests out of politics. ...For every special interest is entitled to justice, but not one is entitled to a vote in Congress, to a voice on the bench, or to representation in any public office. The Constitution guarantees protection to property, and we must make that promise good. But it does not give the right of suffrage to any corporation.

We must have complete and effective publicity of corporate affairs, so that the people may know beyond peradventure whether the corporations obey the law and whether their management entitles them to the confidence of the public. It is necessary that laws should be passed to prohibit the use of corporate funds directly or indirectly for political purposes; it is still more necessary that such laws should be thoroughly enforced. Corporate expenditures for political purposes, and especially such expenditures by public service corporations, have supplied one of the principal sources of corruption in our political affairs.

The absence of effective State, and, especially, national, restraint upon unfair money-getting has tended to create a small class of enormously wealthy and economically powerful men, whose chief object is to hold and increase their power. The prime need to is to change the conditions which enable these men to accumulate power which it is not for the general welfare that they should hold or exercise. ...We grudge no man a fortune in civil life if it is honorably obtained and well used. It is not even enough that it should have been gained without doing damage to the community. We should permit it to be gained only so long as the gaining represents benefit to the community. This, I know, implies a policy of a far more active governmental interference with social and economic conditions in this country than we have yet had, but I think we have got to face the fact that such an increase in governmental control is now necessary.

No man should receive a dollar unless that dollar has been fairly earned. Every dollar received should represent a dollar’s worth of service rendered — not gambling in stocks, but service rendered. The really big fortune, the swollen fortune, by the mere fact of its size acquires qualities which differentiate it in kind as well as in degree from what is possessed by men of relatively small means. Therefore, I believe in a graduated income tax on big fortunes, and in another tax which is far more easily collected and far more effective — a graduated inheritance tax on big fortunes, properly safeguarded against evasion, and increasing rapidly in amount with the size of the estate.

Conservation means development as much as it does protection. I recognize the right and duty of this generation to develop and use the natural resources of our land; but I do not recognize the right to waste them, or to rob, by wasteful use, the generations that come after us. I ask nothing of the nation except that it so behave as each farmer here behaves with reference to his own children. That farmer is a poor creature who skins the land and leaves it worthless to his children. The farmer is a good farmer who, having enabled the land to support himself and to provide for the education of his children, leaves it to them a little better than he found it himself. I believe the same thing of a nation.

...People forget now that one hundred years ago there were public men of good character who advocated the nation selling its public lands in great quantities, so that the nation could get the most money out of it, and giving it to the men who could cultivate it for their own uses. We took the proper democratic ground that the land should be granted in small sections to the men who were actually to till it and live on it. Now, with the water power, with the forests, with the mines, we are brought face to face with the fact that there are many people who will go with us in conserving the resources only if they are to be allowed to exploit them for their benefit. That is one of the fundamental reasons why the special interests should be driven out of politics. Of all the questions which can come before this nation, short of the actual preservation of its existence in a great war, there is none which compares in importance with the great central task of leaving this land even a better land for our descendants than it is for us, and training them into a better race to inhabit the land and pass it on. Conservation is a great moral issue, for it involves the patriotic duty of insuring the safety and continuance of the nation.

...We are face to face with new conceptions of the relations of property to human welfare, chiefly because certain advocates of the rights of property as against the rights of men have been pushing their claims too far. The man who wrongly holds that every human right is secondary to his profit must now give way to the advocate of human welfare, who rightly maintains that every man holds his property subject to the general right of the community to regulate its use to whatever degree the public welfare may require it.

But I think we may go still further. The right to regulate the use of wealth in the public interest is universally admitted. Let us admit also the right to regulate the terms and conditions of labor, which is the chief element of wealth, directly in the interest of the common good. The fundamental thing to do for every man is to give him a chance to reach a place in which he will make the greatest possible contribution to the public welfare. ...No man can be a good citizen unless he has a wage more than sufficient to cover the bare cost of living, and hours of labor short enough so after his day’s work is done he will have time and energy to bear his share in the management of the community, to help in carrying the general load. We keep countless men from being good citizens by the conditions of life by which we surround them.

I read this the first time over a year ago, possibly pointed there by you, and was astonished (ASTONISHED!)...how far has acceptable political discussion fallen when Theodore Roosevelt sounds like a raging Bolshevik?


I do reference the Square Deal speech once or twice every year because I find it a good way to recalibrate my own political compass and hope others may also.

Of course there's much in the writings of Edmund Burke, the father of Conservatism, that today's Tories and even many Libs would find unwelcome, particularly his advocacy of conservation and preserving the land for future generations.

I remember being taken to Mt. Rushmore by my parents on a then-typical road trip holiday in the 60s. Americans swarmed the place to stare at the carvings of their national heroes - including Jefferson, Lincoln and T. Roosevelt. The wisdom that those three presidents bestowed on their people is largely forgotten. We imagine ourselves as different creatures with different principles when, in reality, we are people transformed and living with values not of our own but inculcated by and for the benefit of others.

Here's one example. There has been enormous wealth created during Obama's terms, post 2008. Almost every bit of it has gone to a narrow segment of the American population, those who have most and need least. People don't understand how eerily that result mirrors feudalism. That's the way it used to work.

The world Roosevelt here describes is the antithesis of feudalism and yet we think it radical. We have been well conditioned.