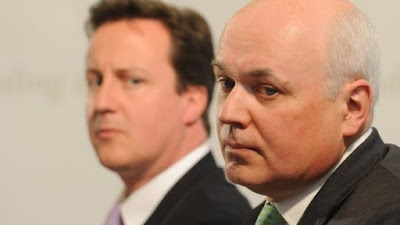 First it was Tony Abbott. Then it was Stephen Harper's turn to be turfed. Now it's David Cameron who is getting perilously close to the exit door after being exposed, by a Tory insider, along with his capo, George Osborne, as nasty, cruel shitheels.

The Guardian's Suzanne Moore weighs in on the controversy surrounding the resignation of Iain Duncan Smith from the Tory cabinet over what he denounced as a "deeply unfair" budget. On his way out, Smith may have left both Cameron and Osborne fatally gored.
Posted by The Mound of Sound at 5:55 AM

It always ends the same way for these folks, Mound.

You have to ask yourself just what is IDS up to. He's been the architect of the nasty party slashing benefits as fast as he can enjoy doing so. For five years he has been at it in the Cabinet and designed all of the cuts including this one. So why now and why in this manner?


It does, Owen, not not before they've created enormous suffering and loss.


@ Ben - that's a very good question. Is Smith the front man for some sort of palace coup?

Took them less than a year to knock the wheels off their own moving wagon. We're watching the last thrashing moments of a dying beast. Brexit, and they piss off their wealthy international business supporters/donors. Attack everyone in lower income brackets, and they become reviled from within and without themselves. From here, it survives, conservatism it will do so through naked fascism (i.e. Trump), but even that outcome is ultimately unsustainable. They can't get votes from the younger generations because they've taken away their future. It's the rich, the everyday idiots, and the angry white older voters. First group is shrinking as wealth concentrates, the last group is won't exist in a few years.


A wonderfully tidy synopsis, Boris. Many thanks.