He Never Ceases to Disappoint 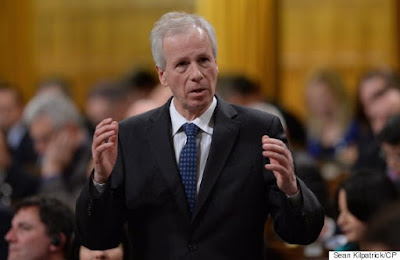 Stephane Dion 2.0 seems to be a lot different from the Stephane Dion of the "Green Shift" days. He's back as foreign affairs minister to his boss, Justin Trudeau, but Dion comes across as though he's personalized his role as if he's the prime minister of foreign affairs.

Dion unveiled his new approach to foreign affairs dubbed "responsible conviction"  and then proceeded to both shirk responsibility and demonstrate the mercantile dimensions of his conviction by a sleazy defence of the Saudi arms deal. As far as Dion is concerned, money trumps both responsibility and conviction although he promises the government will do better in the future when flogging death machines to war criminals and state sponsors of terrorism. Good on you, Stephie!

L'il Steph has also interceded with the United Nations to somehow rescind the appointment of Western University law prof, Michael Lynk, as the UN's Special Rapporteur on human rights in Palestine.

The past one, Makaram Wibisono, an Indonesian former diplomat, quit earlier this year, saying he failed in his mandate because Israel declined to give him access to the Palestinian territories. His predecessor was Richard Falk, who was widely criticized for anti-Israel extremism.

Now, the office is beset with a curiously Canadian scandal, thanks to the swift condemnation of Michael Lynk, the new Canadian appointee, by Stéphane Dion, Canada’s Foreign Minister, arguably on spurious grounds.

Lynk, a professor of law at Western University in London, Ont., defended himself on Monday, saying he has been unfairly attacked with “snippets” of his writings and speeches taken deliberately out of context.

Dion made his call in a tweet on Friday.

The message follows criticism by Jewish groups and the opposition who accused Lynk of having a long-held and public bias against Israel.

There you go, Stephie's responsible conviction in action. Dion emphasized that Lynk "does not represent the views of this government." Gee, Steph, thanks for clearing that up.

Every time I wonder about people like Dion and Paul Martin, I think of Power Corporation and the Desmarais family. Like today. I re-read this article, which shows you how they run the country in the absence of Conservatives in power, who are run by American elitist money. Still Power Corp has Butts and MacKay as confidants, and the new Economic Council advising Morneau for a buck each a year looks like a list of Power Corporation sycophants.

We're thoroughly screwed. Forget all that Green stuff unless you want to bear arms, and I'm too old to do anything but squawk.

Dion is turning out to be a milk toast Foreign Minister with no backbone, who will do Israel, The US and Saudi Arabia's bidding.Negotiating for what Canadians want is not even on the table. We are told after the fact, when the decision has been made. What is it about our recent governments, that when they no sooner get voted in, they go rogue?

Dion released brilliant letters on Quebec separatism back in the day. They did much to fight some of the more dubious fantasies spun by the separatists.
I liked him for that.
In retrospect it must have been Dion's deputies that wrote those. He hasn't made sense in either language since then.

Funny - one of his enemies, Daniel Turp (an annoying effective separatist spokesman) is taking Dion and the Feds to court on this deal.
God's speed, I say!

The courts (and Papa Trudeau's charter) saved us from some of the worst crap of the Harper regime. Let's hope we see more progressive victories!