The Best Critical Analysis of Stealth Warplanes You May Ever Read ...or Need 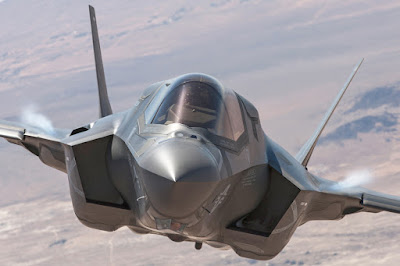 "It is notable that none of the characteristics for which the stealthy aircraft have been optimized has been useful in combat for the past seventeen years. In the meantime, we have been technologically outmaneuvered by both Chinese and Russian air defense designers, as we double down on a technology that gave us a decisive advantage a quarter century ago. We are building the combat air force for the wrong attributes, and we are unlikely to reconsider this path as long as the Air Force remains stuck in denial."

When it comes to stealth warplanes he's ready enough to recognize their advantages. He also has a keen sense of the limits to those advantages and the many disadvantages, the minuses that outweigh the plusses. It's a fine essay that deserves to be read in its entirety.
Posted by The Mound of Sound at 3:17 PM

Our own personal Maginot Line. Who Knew?

The , unreported, concept of the F35 system is that a USA coalition ( only the USA will have the AWACS type aircraft to make it work) is that it is a predominately an Anglophile weapons system to make war against Russia or China.
To be beholding to the USA as regards national security decisions is to me, aborant.
Forget the cost over runs, forget capability; there is much more at stake.


I have long contended, Anon, that those air forces that adopt the F-35 are effectively enlisting in America's aerial foreign legion.

To be stealthy at all, the F-35 depends on support aircraft with active radar and other sensors that data-link essential information to the F-35 pilot. Due to its limited range it also depends on vulnerable tankers brought to the forward edge of the battle space to top it up on the way in and refuel it on the way out.

Every now and then an American general will admit that in an attack mission in hostile airspace the F-35 will require a fighter escort, the F-22.

In other words, all the support it requires operationally we don't have. To deploy it we would have to operate in conjunction with and under the control of the air force that does have all the requisite support aircraft, the USAF.

Now, with Trudeau kicking defence procurement even further down the road (as Harper did for the last five years) it's impossible to see any justification for spending on the F-35. The essay (linked) speaks volumes.

Now, with Trudeau kicking defence procurement even further down the road (as Harper did for the last five years)

With the current state of USA Politics I can understand anyones apprehension with hanging on to the USA coat tails.
Only the UK's Cameron government seem to support the F35.
My guess is that the UK will finish up with two new aircraft carriers with dysfunctional aircraft making the lemon even bigger as those carriers are built to use, only, F35's.

BTW.
I do believe that the F22 is no better than the F35.
Stealth may be a myth or at best a damned good con job.
Stalin said; quantity is it's own quality!!