It's Just a Theory But, If It's Right, We Need to Know and Soon 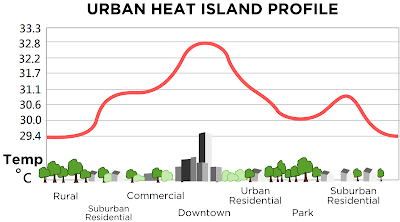 Australian scientists have published a paper that claims heatwaves in the northern hemisphere by mid-century may become an extra 3 to 5 degrees hotter than expected. The culprit is a miscalculation in how plants respond to higher carbon dioxide levels.

As atmospheric levels of the greenhouse gas increase, plant stomata – the tiny pores on leaves that open to take in CO2 and let out water vapour – won't need to open as much.

"There's less water vapour being lost so you have a net warming effect," said Jatin Kala, a lecturer from Murdoch University and lead author of the paper that was published Monday in Nature Scientific Reports.

"During a heatwave, it makes it a lot worse" not to have that evaporative cooling effect, he said.

The researchers used data from 314 plant species across 56 field sites to examine how plants responded. Existing climate models had assumed all plants would trade water for carbon in exactly the same way.

Needle-leaf forests, tundra and agricultural land used for crops would likely suffer the biggest temperature increases. Heatwaves from Europe to China were likely to become 3-5 degrees hotter than the already higher base expected from global warming, Dr Kala said.

"These more detailed results are confronting but they help explain why many climate models have consistently underestimated the increase in the intensity of heatwaves and the rise in maximum temperatures when compared to observations."

It shouldn't be hard to verify the research behind this report, which has already been peer reviewed, but if it is confirmed then we need to pay more attention to the risk of heat-related death, especially in our 'urban heat island' cities.
Posted by The Mound of Sound at 7:21 AM