What Do Water and Coal Have in Common?

Well, you can't burn the latter without plenty of the former. Happy World Water Day.

It's no secret that we live in an increasingly water stressed world. There are two main types - drought and flood. Add to that our rapacious over consumption of groundwater resources, aquifers, plus surface water assets, rivers and lakes, and you wind up with a world in which 800-million don't have access to clean water and 2.5-billion lack access to basic sanitation.

But back to coal. A report commissioned by Greenpeace finds that coal power plants consume enough freshwater to meet the daily needs of a billion people. That comes pretty close to matching the number who now lack access to clean water. Worse yet, many existing coal plants and new plants under development are in water stressed areas.


“We now know that coal not only pollutes our skies and fuels climate change, it also deprives us of our most precious resources: water,” said Harri Lammi, a Greenpeace campaigner.

The research found 44% of current plants, and 45% of planned coal power plants, were in areas that were in a state of water stress – where water use is already considered to be having significant ecosystem impacts.

And about a quarter of the proposed new coal plants were planned in regions that were already running a freshwater deficit, where water is used faster than it is naturally replenishing – areas that Greenpeace put on a “red list”.

As for the mythical "clean coal technology" -

The research uses more precise data, and provides more in-depth findings, but is broadly in line with figures released by the International Energy Agency in 2012, suggesting the amount of water used in electricity generation would increase by 85% between 2010 and 2035.

The agency noted that much of the increase in water use in future would, ironically, be driven by a move towards plants that produced less carbon dioxide.

More carbon-efficient technologies would actually make the water problem worse, since they generally use more water, it said. 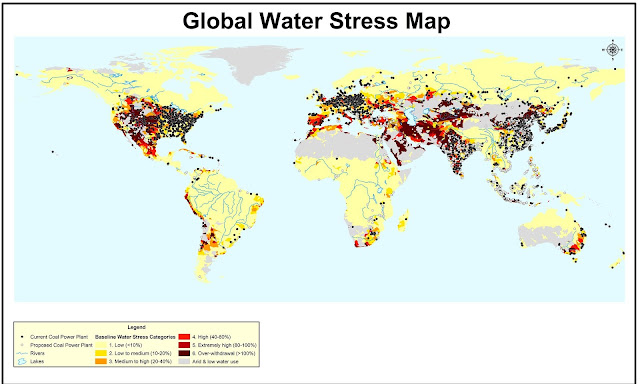 The Greenpeace report included this map (click to enlarge) showing existing and proposed coal power plants and their relation to water stressed areas (everything but yellow). In Canada that includes the prairie provinces,

Mr Peabody ironicly is on the verge of bankruptcy. After generations of misery failure. We have managed to ignore the climate and the outlook for water is no better


No, it's not one bit better, Steve. For how many years has Maude Barlow been warning that the freshwater crisis was going to become as serious a challenge as global warming?