You May Need to Sit Down for This. A 2C World Is Just Around the Corner. 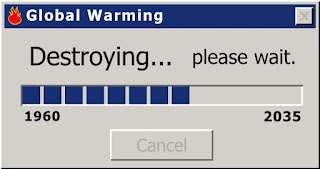 You know that business about keeping global warming below 2 degrees Celsius, the "do not exceed" point at which all bets are off?

You know how we were planning to do things, maybe lots of things, all sorts of things - you know, things - to keep from reaching 2C by 2100?

University of Queensland and Griffith University researchers have developed a “global energy tracker” which predicts average world temperatures could climb 1.5C above pre-industrial levels by 2020.

That forecast, based on new modelling using long-term average projections on economic growth, population growth and energy use per person, points to a 2C rise by 2030.

The UN conference on climate change in Paris last year agreed to a 1.5C rise as the preferred limit to protect vulnerable island states, and a 2C rise as the absolute limit.


Here's another way to look at the situation:


The new modelling is the brainchild of Ben Hankamer from UQ’s institute for molecular bioscience and Liam Wagner from Griffith University’s department of accounting, finance and economics, whose work was published in the journal Plos One on Thursday.

It is the first model to include energy use per person – which has more than doubled since 1950 – alongside economic and population growth as a way of predicting carbon emissions and corresponding temperature increases.

The researchers said the earlier than expected advance of global warming revealed by their modelling added a newfound urgency to the switch from fossil fuels to renewables.

Hankamer said: “The more the economy grows, the more energy you use ... the conclusion really is that economists and environmentalists are on the same side and have both come to the same conclusion: we’ve got to act now and we don’t have much time.”

Wagner said the model suggested the surge in energy consumption was not offset by improvements in energy efficiency.

He said energy use per person was on track to rise sixfold by 2050, which had dire implications for temperatures when combined with economic growth of 3.9% a year (the six-decade average) and a world population of 9 billion.
Are these latest numbers accurate? I don't know but our leaders had better get those answers and very soon. If there's just one thing we have learned from climate science over the past 15 or so years it is that the predictions are invariably proved dangerously optimistic. 15 years ago we were told of changes that would happen in a hundred years that have already come to pass. One by one these predictions keep tumbling.

Look at it this way. A couple of years ago we were at 0.8C above pre-industrial levels. Last year we got to 1.0C. Now, we're told, we'll be at the threshold of 1.5C in just another four years. This thing appears to be picking up steam.

You don't transition out of a burning building. You grab the kids and get the hell out. This is a challenge in which there's no room for good intentions, no prize for second place.

Pieter Tans, lead scientist of NOAA’s Global Greenhouse Gas Reference Network, confirmed that the increase, reported previously by New Scientist, represented a record year-over-year growth for Mauna Loa. He also said that in addition to the stark rise in carbon dioxide levels over the past year, researchers have now observed four straight years of increases of more than 2 parts per million in the atmosphere.

Another expert says any hopes of getting back to 350 ppm of atmospheric CO2 aren't feasible. In fact he says that we are well and truly locked in to 400 plus ppm for the rest of our lifetimes at least.

However, there also appears to be a role for the El Nino phenomenon in the records this year. “CO2 tends to rise much faster during and just following El Niño events,” wrote Ralph Keeling, director of the Scripps Institution of Oceanography carbon dioxide program and son of Charles David Keeling (after whom the iconic graph of rising greenhouse gas concentrations is named), last October. At the time, Keeling forecast that because of the current El Nino event, we would probably never see CO2 levels decline below 400 again “in our lifetimes.”

In that post, Keeling also explained why CO2 goes up so much during El Nino. It’s because of the way the phenomenon tends to drive droughts across the tropics, which in turn leads forests, like those in Indonesia, to lose carbon in wildfires — which happened at a massive scale in 2015. Drought also stunts forest growth, which leads to less carbon dioxide removal from the atmosphere, Keeling wrote.

“The loss of carbon from tropical forests in El Niño years is temporary as the forests tend to regrow in normal years, building back their biomass and sucking CO2 out of the air in the process,” Keeling concluded. “But the eventual recovery from this El Niño won’t bring us back below 400 ppm, because its impact will be dwarfed by the global consumption of fossil fuels, pushing CO2 levels ever higher.”

I'm sure that Justin Trudeau really wants to see greenhouse gas emissions slashed but he can't have it both ways.  What is the point of Canada's provincial and municipal governments cutting emissions at home when he's bent on exporting high-carbon bitumen so that it can be burnt abroad?  Those emissions all wind up in the same atmosphere no matter where that heavy oil is burned.  We can't export the stuff and then pretend to have no responsibility for the emissions. That's not what grownups do.