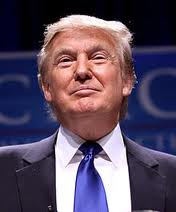 In a world of woe it's great to take a break, have a bit of fun, take a load off. Here's a fun way to waste five or ten minutes. Read the transcript of a Donald Trump speech. They're all pretty much the same and if you look you'll find several of these transcripts online.

Just to start you off, click here. Now, as you're reading through this try to figure out what Trump is conveying that's attracting so many Americans. No cheating. You may not go to YouTube and watch hours of monster truck racing and catfish wrestling videos.

As I read through this I began thinking of a scenario where, say, you had a 15-year old who came in on Friday night after being out with his friends and was speaking this way. I think you would suspect the kid was on drugs, stoned out of his mind. It's incoherence, utter babble, rambling nonsense.

Here's another glimpse into this bugger. From last night's RealTime:

It’s amazing how stupid Americans have become. They’ve never been particularly bright, especially the religious right which still believes in a magical mysterious and invisible Sky God… but Trump said, “the level of genius in the public” which really takes the cake. What genius? What understanding? They have none whatsoever.

I read through his December 30 speech. Trump never said ANYTHING of substance. Not one word. Just self-congratulatory spew. This is perfect propaganda, claim you’re “something” while explaining nothing. And the idiotic “genius public” buys into this, hook, line and sinker. Which is what Trump will do - sink the country behind racist rhetoric and fascist reactionary violence.

Definitely a ‘psychopath’ who endlessly congratulates himself. Never explains his positions, just puffs out his chest, pokes a stick, puffs out his chest some more and the idiotic (non-genius) public falls for this. Con-man is right.

It’s not enough to claim how rich you are, or how great you are, or even how good your poll numbers may be. You must be GOOD at leading and making political decisions, you must have the ability to devise strategy and political compromise to accomplish national goals and to protect Americans. But Trump has none of these qualities, he’s far to busy trying to convince everyone how great he is. But he’s not, not at all. He caters to racists, bigots, white supremacist and xenophobic attitudes and fears.

The facts are Trump is in WAY over his head. He’s completely clueless about foreign policy and political realities. The man has no plan, no course of action, nothing but rhetoric and endless bravado.

Scary? Yeah, real scary because should he be (s)Elected, the entire world will turn against this country in a way which we have never, ever seen before. And Trump is stupid enough to do something truly dumb like start World War III.

The man is truly a clown. He’s skillful enough to tell people what’s wrong, but inexperienced in discourse (he simply spews whatever idiotic thought is running around in his head at the moment, which often gets him in trouble). He’s two-faced too and cannot be trusted to keep his word on anything.

Trump IS a loon (on crack) and his infotainment spew is weary, disgusting and non-enlightening to anyone but fools and morons who feel disenfranchised and abandoned by the the status-quo (all true). But Trump isn't the answer - he's part of the reason the neglected will remain neglected. But they're simply not bright enough to see past the rhetoric and self-adulation spewed by Trump.

It is scary, SA. We're familiar with Trump in news bites but when you have a chance to read his words, an entire transcript, it becomes far more worrisome. He has all the coherence of a very high addict. Amazing.