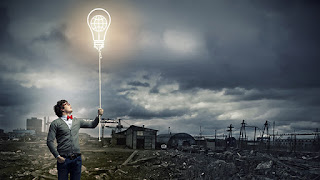 You're a bright lady. You have an equally bright partner. You're reasonably well-educated and very hard working. You've built successful careers, started a family, managed to get everyone into a massively overpriced home, but hey. You live on a street with neighbours, many of whom mirror your own life story. You're content. The future looks rosy.

That's where I come in. Like you and your neighbours, I am bright - perhaps a bit brighter than the lot of you. Just like you, I'm a self-made success story - if you leave out the leg up I got from my parents and all the money the state invested in keeping me healthy, underwriting the costs of my 18-years in the school system, and all the grants, subsidies and tax breaks lavished on me to get my start-up going and to keep it going. Yep, pretty much self-made.

Unlike you and your neighbours, I got the idea that technology was the way to go, especially creating software that would do much if not most of what you and your neighbours trained to do and do it for pennies on the dollar of your costs, if not for free. You're out of work and, like a seniority war among union members, you have to look to bump someone else out of a job so you can maybe keep up those mortgage payments. Sorry kids, the college fund is out for now.

Already in the early days, the computer developed the capacity to displace the arts of typewriting, bookkeeping, filing and draftsmanship. When linked to routers and fiber-optic cable, it could go on to displace the mail, the telephone, the phonograph and CD player, the camera and film, board games and sports, the movie theater and the VCR and the DVD player, not to mention the clock and the watch. It long ago displaced the physical bookstore and is now displacing the physical book, the newspaper, the magazine, and the academic journal, not to mention the physical library as a repository for these things. Televisions have survived only by having been transformed into computers with large screens. Analog signals have left the airwaves. In rich countries, cathode-ray tubes are now scarce as typewriters. There is no equivalent here to the persistence of coal in the oil age.

While the patterns of creative destruction generated by oil and information resemble each other, there are important differences. Most notably, automobiles wear out on their own. The heat of the engines, the friction of the road, rust, and collisions limit the effective life of any car or truck. And this is true even before the notorious effects of planned obsolescence. The effect is to create an ongoing demand for new cars, and also a vast industry devoted to maintenance, inspection and repair. Roads, too, need to be rebuilt and expanded, and houses built with garages for all the cars. In the transformation to a car-and-oil culture, there was work for many who were not engaged in the building of brand new cars. The technology destroyed jobs, but it also gave rise to many new jobs as it developed and matured.

With computers and the internet, this scope for secondary employment is far less. Hardware wears out slowly because it has few moving parts and because it is operated, for the most part, in stable, clean, temperature-controlled offices and homes. The infrastructure - optic cables and routers, say - once built, lasts a long time. There is no equivalent of the effect of a heavy truck on tarmac. And when the hardware does wear out, it is replaced. Because of the cheapness of components, repair is rarely preferable to replacement, and so the computer-repair sector remains small and is shrinking as the equipment becomes ever more uniformly solid-state. Software lasts indefinitely unless compromised by a viral attack; it may be updated or replaced automatically with no on-site labor required.

Thus if the new industries wish to grow, they must constantly produce new designs and new products. Software must be upgraded. Hardware must be upgraded to run the upgraded software. Faster speeds, more storage and bigger caches -these are quality improvements, but in many applications, they are eaten up by more demanding programs. (As they used to say in the trade: what Grove [Intel CEO] giveth, Gates taketh away.)Most of all, the big thing is new applications: new ways to make the computer (or the tablet or the smartphone) the platform of choice for tasks previously done elsewhere and otherwise. Thus new ways for the information-processing device to perform tasks that used to be carried out by someone else for money; new ways to kill off activity elsewhere; new ways to devalue somebody else's skill. New ways to waste time and new ways to show the world that one has time to waste.

The ratio of jobs killed to jobs created in this process is high. The service and office workers, checkout clerks, account managers, and salespeople whose jobs can be consolidated and rendered redundant by the digital revolution are the modern version of the horses driven off their Depression-era farms. And the process does not stop: the costs saved by moving to digital platforms continually claim new victims as prices fall and technical barriers to introducing the new methods in one venue after another are overcome. Moreover, many of those displaced are not only unemployed but obsolete. They had fairly narrow skill sets to begin with; now they are useless.

...For the large numbers of people once sustained by the now-displaced activities... actual living standards decline. Having lost their jobs, they lose their incomes. This is the effect that the classical economists emphasized. That they can communicate for nothing or check the news or download songs and movies or watch sports or listen to the radio from around the world is offset, for them, by the reality that they cannot maintain payments on the houses in which their computers and internet connections reside.

A part of the cash flow that previously supported these people - the managers and the checkout clerks, the secretaries and the TV repairment, the booksellers and the reporters and the photo-lab technicians - now flows instead to a minute number of people at the top of the digital food chain. This was a dominant source of rising inequality in the late 1990s, when fully half the rise in income inequality measured across counties in the United States could be accounted for by rising incomes on Wall Street, in the three counties of Silicon Valley, and in Seattle. It continued to be a large part of the continuing high inequality in the decade that followed, although the locus of most rapidly rising incomes shifted, first to the military-heavy counties around Washington, DC, and then to the most flagrant centers of real estate speculation in the months before the collapse.

The rest of the cash flow that technology eliminates finds no immediate outlet. Businesses that had previously met a larger payroll now meet a smaller one. their cost saving, like all saving, implies lost employment, diminished incomes, and the waste of displaced human talent. This affects all those directly displaced and also those who previously worked to provide goods and services to those now unemployed. In effect, the "saving" disappears. There is no paid activity to replace the activity lost. The plain result of the new technology is unemployment.

In this sense, the digital products all around us have cost us millions of jobs. How many? It is practically impossible to say, and the reason for that is, you can't distinguish a job lost to technology from a job lost to a business slump. The two are, actually, the same thing. In the nature of business cycles, jobs are lost to slumps. This is when businesses must either downsize or fail. So we attribute the job losses to the slump. But if that were all there was to it, the jobs would reappear with economic recovery. But they have not. As economic recovery begins, businesses find that in the next round of investments, the next redesign of their operations, their needs can be met with fewer workers.

...The new technologies do save resources. They do help business cut costs, and businesses have to control costs or they do not survive. And it would all be worth it if we could only find some other way to maintain, up to a point, the incomes and consumption possibilities of those who have been affected: keeping them in their homes, their kids in college, and their medical bills paid as required.

Galbraith's analysis seems to corroborate the arguments of proponents of a guaranteed annual income. This requires a rebalancing of the economy versus society, a recognition that a healthy, secure society is an essential prerequisite to a healthy economy. In other words, the destructive impacts of technology make the case for the abandonment of neoliberalism, the inevitable malignancy of free market fundamentalism. Redistribution of wealth isn't just a nice thing to do, it's a vital process of social renewal and advancement. When technology eliminates "paid activity" on which society depends that loss must be balanced, offset.

The final word goes to:

We've had a lot of economic destruction, Mound. But I wouldn't call it creative. Change is only creative if it breaks your way.


It wasn't you or me or those like us who decided to call it 'creative', Owen.