What Then Would You Have Us Do? 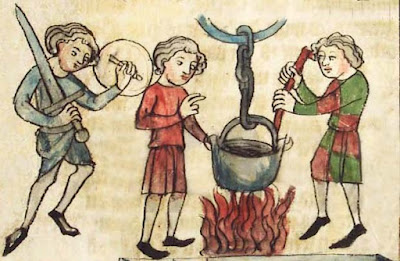 I've read a lot of backlash commentary today on the Ghomeshi acquittals. There's a lot of outrage over the judge's refusal to convict the now reviled deviant. Some blame the justice system, others resort to ad hominem attacks on the judge, others fault Ghomeshi's defence counsel. Almost none of them fault the victims.

None of these denunciators offer the one thing that we need, how we should change the system to achieve a more preferable result. There are changes we could make that might have sent Jian to a lengthy stay in the Greybar Hotel. Here are a few:

In sexual assault cases we could abolish the presumption of innocence. We could go for the "guilty until proven innocent" approach. What could possibly go wrong with that?

In these cases we could dispense with the proof beyond a reasonable doubt as the threshold for conviction. How about "maybe" or "I guess so" or something along those lines. Something a bit vague, nebulous.

And what's with this business about having to tell "the truth, the whole truth, and nothing but the truth." Why not something more like "the truth or as much - or little -  of it as you would like to tell us"?

I know. I've got it. How about we just ditch the presumption of innocence, the reasonable doubt business and that nonsense about the whole truth and nothing but. There is an alternative, time honoured at that -  judicium Dei or Trial by Ordeal, King Athelstan's favourite.

Here's how it works. You get a big brass cauldron full of boiling oil and you drop an iron bar into it. The accused has to plunge his hand and arm in, grab the bar and fetch it out. If he manages to get it out but his skin blisters he's damn well guilty and it's off with his arm or head, entrails maybe.

But, of course, I'm being facetious. Yet the Ghomeshi case reminds us of the old truism that "hard cases make bad law." Ghomeshi got away with it, this time. That's law, it happens sometimes. Blame who you like, doesn't matter to me. I know who the Crown will be blaming and, frankly, me too. That said it's one case and it does not justify fanciful alterations of the judicial system. Let it go.

Obviously you are a misogynist and probably also an MRA. An emotional public self-denunciation is in order, I am afraid...

There is plenty of heat and only very little light.

Just like the rest of the world wide web.

Miosogynist, really? I didn't know what an MRA was but I looked it up. No, I don't think so. However, while you're launching into ad hominems, why don't you use some of that brainpower to answer the question of what would you have us do? Where do you see the problem? Do you really believe the judicial system is flawed and, if so, how should we fix it? I understand some of the complaints about bias in the ranks of law enforcement but that's a matter to raise with the responsible level of governments - provincial and municipal.


Dana, I think you nailed it. Plenty of heat and very little light.

I didn't bother looking up mra. Already gave him too much power just even acknowledging his chickenshit post!!

This rant is pretty nasty man. Kirby E is right. Claiming women are like savages who want to bring back Medieval practices because they don't agree with how easily a victim's testimony can be discredited in a court of law definitely falls in the ballpark of misogynist.

But then again I always thought The Mound was a demagogue who regularly resorts to hitting below the belt. Funny though how Kirby E. cheers The Mound on whenever he's calling Mulcair the "Angry Beard" and resorting to other ad hominem rhetoric. Now you know what the nonsense is like less the partisan blinders. :)

Anonymous 1 is being sarcastic I think...

"Anonymous 1 is being sarcastic I think." duh - but then again text & humour do not mix well.

"Ghomeshi got away with it, this time."

He got away with being a creepy predator of sorts. And the CBC looks really bad for enabling this guy. He should have been disciplined or fired long ago based on what's come out. I'd support an inquiry into that situation. (It was during the 'Harperized' years at the CBC after all.)

But the trial and all the other info shows a dweeby guy that has very strange counting rituals.
Perhaps the next trial in June will do better, but I doubt it. Just another sh*t show coming that will further harm the cause of sexual abuse survivors.

I said my suggestions were facetious. Did you not read that far along? My remarks weren't directed to women but to both genders who rail against the judicial system.

There's no distinction between a "victim's testimony" and the testimony of any other witness. You don't really understand criminal law or the law of evidence, do you? You seem pretty confused which could explain your emotional approach. Don't worry, you'll get over it.

Reminds me of a mob waiting outside to lynch ghomeshi.There is nothing more important then upholding the law. It is the foundation that supports our freedom and democracy and in criminal court it determines our innocence or guilt. Ghomeshi probably did the things the three witnesses said, but it must be proven that he was guilty of this beyond a reasonable doubt. Can anyone who listened to these 3 witness contradictions, outright discrepancies, and yes, outright lies,really believe that it would have been okay to find Ghomeshi guilty. The judge chose the verdict of not guilty, not because he's a misogynist, but because he followed the law and in so doing concluded that Ghomeshi was not guilty. There is nothing to like about Ghomeshi and his admitted liking for rough sex, but in this court of law, he must be proven to be guilty beyond a reasonable doubt. He wasn't. The judicial system, in spite of the hysteria worked.

.. rough sex.. assault .. grooming .. punches.. dinner .. slaps .. music .. choking .. wine .. hair pulling .. small talk .. Let it go .. ? If what Ghomeshi was serving with/without consent appeals.. and you came back for more.. well Amen.. & None of my business. If you were outraged & seek Justice you have my immediate support.. This is dark shite.. & there's zero tolerance & zero interest in my amazing relationship.. Can't see right now, how the Courts can deal otherwise.. The guy stinks to high heaven.. putrid.. reeks. AMEN..

@ Pamela - I don't think anyone - that would include me - believes Ghomeshi to be anything but a deviant with violent tendencies. The judge had to deal with the totality of admissible evidence - all of it. Counsel decide what evidence to adduce. The judge determines admissibility. After that it's in and he/she has to deal with it. Misleading investigators is serious stuff. Colouring evidence through omission likewise. Apparently collaborating with other complainants does nothing to bolster the witnesses' credibility. The judge didn't say that Ghomeshi didn't do it or that he was innocent. He ruled, quite properly, that the evidence before him didn't meet the criminal standard of proof - the one and only standard that applies to criminal offences.

My brother does criminal defence work. We spoke about the case as the cross-examinations were concluded. It was obvious to us that there was simply no way Ghomeshi could be convicted. That doesn't sit well with some people, many of them who would in any other criminal matter be quick to realize that the laws that sometimes let culprits avoid conviction also protect their own rights should they be wrongfully accused.

I agree with MOS the evidence was weak, the judge ruled on what he had. That law spoke. Now I totally agree that JG was/is a creepy strange sexual deviant who definitely crosses social mores when grooming for dates/victims.
But even more astounding is that he got away with workplace abuse(emotional and sexual) while higher ups turned a blind eye, why? Because his brand was still golden, once it became tarnished, the CBC turfed him. They should have done it along time ago.
Now all the emotional and social justice issues in the world cannot convict a person for crimes, only the law can.
But for sure Ghomeshi has some abusive srxual disorder that makes him chose vulnerable women. He could have gotten his kink out in any one of the may clubs in Toronto that cater to his style, but the reality is he liked having fans/adoration as part of the package. He also liked the element of surprise ( I think if I'm reading any true reports of the encounters)
Why did the women put up with it, well that's not as black and white as the courts needs, unfortunately. Why did the women go back for more, and send letters and have second or third dates???
Well...relationships, feelings and humans are very complicated.
But the courts and the legal systems cannot be that flexible as to understand the history or motives of the victims.
All we can hope is that JG no longer will have power over any other women of the future.
The next trial will be just as interesting. But thanks to CBC letting it go or not wanting to admit how much of a problem they had, he probably will get off from that charge too.

Hi Deb. I began looking at the trial and verdict from the judge's perspective. For starters this is the sort of case that no judge wants. They know they'll be excoriated when it's over and it's part of their position that they may not engage in debate to defend themselves. They also tend to have families and know that there's a real likelihood their family members will be exposed to ridicule or anger. When the administrative judge threw the Ghomeshi trial to this fellow I'll bet a lot of his colleagues breathed a deep sigh of relief.

A big part of the problem is that these witnesses were incapable of giving the truth, the whole truth, and nothing but... Lucy herself says that she didn't remember the further communications with Ghomeshi. Another apparently forgot she later gave him a hand job. And so it went. What does that tell the judge? He has witnesses who either cannot or choose not to recall what happened. Their memories are unreliable at best, deceitful at worst. That happens over ten years although I would imagine some of these things would have been retained in memory but who is to say?

The witnesses showed that they were either untruthful or their memories were not reliable. What then remains upon which the judge could enter a conviction? Nothing. That's all he was given. There are people such as Kirby who believe the judge could somehow ignore that, should have ignored it, looked the other way. No judge can do that. The day judges start doing that, we're all in trouble.

I too fault the CBC for looking the other way for so very long. Management had a responsibility to protect employees from both this guy's vices and his foul, abusive temper. Heads should roll for that.