Back to Earth Time for Justin Trudeau 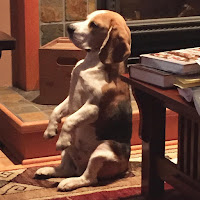 I think Canadians are a bit like my beagle, Buddy. We're beside ourselves when a stranger notices us and pats us on the head. That tail starts wagging and it just doesn't stop.

That seems evident in Justin and Sophie Trudeau's state visit to the White House. Boy, did they attract attention and of the good sort to boot. The American media seem to approve.

In substantive terms the meeting seems to have produced a commitment to cooperate on speeding up the transition to alternative, clean energy. Mom's apple pie stuff mainly. Obama has barely a year left in office and in this traditionally "lame duck" period it's hard to imagine what concrete steps he'll be able to implement, especially if he has to get them through Congress which controls funding.

Then there's Justin, the advocate of getting major bitumen pipelines up and running. Every barrel of that stuff burned across some vast ocean remains on our account. Harper tried and failed to distance Canada from the death and suffering caused by Canadian asbestos exports. Surely, he claimed, if another country was willing to allow its citizens to be exposed to the cancerous product we couldn't be responsible just because we sold it. Wrong. Harper had to tuck his tail between his legs and retreat. When it comes to bitumen, Canadians aren't insulated from its effects simply because it's burned in Asia. The emissions go up into the atmosphere, our atmosphere as much as anyone's.

Will this prime minister stop pushing for the export of the highest-carbon petroleum option of them all? If not his commitment to a clean energy future is a hollow gesture at best. Ultimately it may come down to whether he makes a political decision or an informed, scientific call. Will political expedience carry the day?

We congratulate our prime minister for taking the gags off our federal government scientists. That's great. Yet how much is it worth being allowed to speak plainly if the government chooses not to hear what you have to say? Which is precisely what I fear is about to befall the country.

You cannot fight an existential threat with gestures. The latest scientific research has reinforced the need for powerful action now. Not ten years from now, not the next government or the one after that, this government and now.

A quick review of what we've learned in the past two weeks. One, the carbon budget numbers are all wrong. We imagined we could still emit 2,400 billion tons of atmospheric CO2. Turns out all we've got left is 1,240 tons, just about half. Two, CO2 emissions are spiking, fast. We won't see concentrations below 400 ppm again in our lifetimes. Three, our global warming targets are  nearing much faster than we predicted. We'll be at 1.5C by 2020 and 2.0C by 2030.

In light of this information do you think carbon taxes are going to resolve these threats? Really? If you do, I've got a few incredibly calm canaries down the mine you might be interested in. Only you'll have to fetch them yourself.

I'm watching to see how *serious* Trudeau is about pipelines and the like. There's still quite a lot of Canadians and an entire industry (with lobbyists and other forms of exerting pressure) who haven't quite got it that the glory days of oil are gone. And I also believe Trudeau 'gets it' and might be playing a long game. Of course, I could be wrong, and #trubama is just too much.

Boris ... you stole the words out of my mouth.
Politically it will suit Trudeau to let the market forces kill pipelines rather than the gov't. actively stopping it.
Essentially that's what happened with Keystone .. it got delayed until it was no longer a viable investment.
Let's hope that's what is in play.