This Is Yuuuge, I Tell Ya, Yuuge. 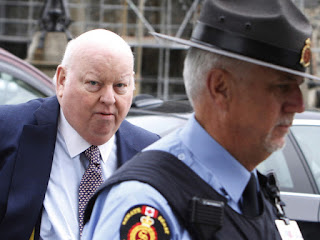 The RCMP has granted blanket absolution to 24 senators fingered for the same sort of expense fiddling that could land Mike Duffy a criminal conviction.

With the consensus building that Duffy will be acquitted of the main, "immaculate bribery" charge, he remains exposed to the minor, "petty cash" offences. Apparently Duffy's sins were rather commonplace among denizens of the Red Chamber.

What makes this conundrum ever more ironic is that the two dozen senators today absolved of their sins will be sitting in judgment on Duffy's expulsion after the April 21 verdict comes down.  Oh.. let he who is without sin....
Posted by The Mound of Sound at 12:24 PM

Like the priests used to tell us regarding things we couldn't understand about God, Mound, justice is a mystery, eh?


Especially when it comes to the Senate. Perhaps it's a Harper-era hangover but I've heard that, when it comes to Senate rules and procedures, the attitude of the upper chamber is that it is not bound by the Charter of Rights and Freedoms. That sounds awfully arrogant. It is. Yet it underlies their claim that they have the right to expel any senator now for the newly-invented crime of 'embarrassing the Senate.' Better yet, they're of the mind that it operates retroactively, something that offends the basic principles of Common Law.

They're getting weirder, Lorne, by the day.