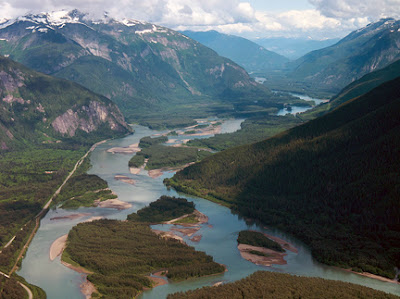 "We will make environmental assessments credible again.
While governments grant permits for resource development,
only communities can grant permission.''

At least that was the promise Justin Trudeau made when he was asking for our support to elect his government and oust the Harper Conservatives. Now he's either got to stand by his word or show his promise was just a politician's scam.

Will the Trudeau government break its supposedly solemn word and approve the Petronas LNG plant proposed for the mouth of the Skeena River? The Tyee's Ian Gill says it's put up or shut up time for Ottawa:

''Restore robust oversight and thorough environmental assessments of areas under federal jurisdiction, while also working with provinces and territories to avoid duplication;

''Ensure that decisions are based on science, facts, and evidence, and serve the public's interest;

''Provide ways for Canadians to express their views and opportunities for experts to meaningfully participate; and

The report, now ticking away on the minister's desk, meets only one of those criteria. If accepted, it would ''help get resources to market.'' Through no fault of the current government in Ottawa, it is now in possession of a report that gives the minister absolutely no basis upon which to make an informed and principled decision about the Pacific NorthWest LNG project.

EnviroMin McKenna's dilemma is that she's being asked to evaluate the Petronas bid based on ginned-up environmental assessments from the Harper administration when energy giants pretty much wrote the rules and the public, including First Nations, were largely marginalized.

It's a tough call in that Petronas has warned if it doesn't get approval now it'll walk from the LNG deal entirely.

In the article, Ian Gill enumerates a litany of failures and corruption of the environmental review process - too extensive to excerpt here. They're more than enough to demonstrate that this is a rigged deal. Now the Trudeau government has to make a call - yield to Christy Clark and the Malaysian energy giant, which means throwing all of their vaunted principles straight down the toilet, or undertake a clean environmental review where none was held before.
Posted by The Mound of Sound at 9:26 AM

Now is the time when we get to see what Justin is made of, Mound.


Yes, Owen, but given the way he's folded on BDS, the Saudi arms sale and, apparently, the TPP, he's batting 0.000 on the tough issues.