Did Someone Declare a "Climate Emergency"? 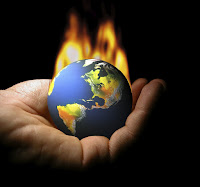 It seems we're being overtaken by events and far sooner than even the supposed pessimists had imagined.

The result was “a true shocker, and yet another reminder of the incessant long-term rise in global temperature resulting from human-produced greenhouse gases”, wrote Jeff Masters and Bob Henson in a blog on the Weather Underground, which analysed the data released on Saturday.

“We are in a kind of climate emergency now,” Stefan Rahmstorf, from Germany’s Potsdam Institute of Climate Impact Research and a visiting professorial fellow at the University of New South Wales, told Fairfax Media.

“This is really quite stunning ... it’s completely unprecedented,” he said.

Meanwhile, in Canada, we've hatched a scheme that would have us lever a green energy revolution on the back of bitumen pipelines. Jesus, take the wheel. 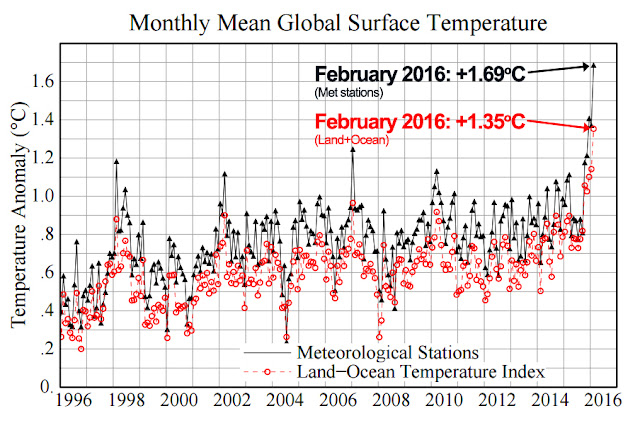 ...given the increasing concentration of carbon in the global atmosphere, which is driving higher long-term temperature increases as well as other extreme weather events, the string of monthly records is a foreboding sign.

The real significance of the February record is in its departure from the seasonal norms that people, plants, animals, and the Earth system are accustomed to dealing with at a given time of year. Drawing from NASA’s graph of long-term temperature trends, if we add 0.2°C as a conservative estimate of the amount of human-produced warming that occurred between the late 1800s and 1951-1980, then the February result winds up at 1.55°C above average. If we use 0.4°C as a higher-end estimate, then February sits at 1.75°C above average. Either way, this result is a true shocker, and yet another reminder of the incessant long-term rise in global temperature resulting from human-produced greenhouse gases.

They conclude, "we are now hurtling at a frightening pace toward the globally agreed maximum of 2.0°C warming over pre-industrial levels."

And Rahmstorf also notes, "We are in a kind of climate emergency now."

I just had a look at the logs for this post. They're pretty awful. Few, it seems, want to know these days. It's like we're resigned to our fate. Is that how you see it? Let me know.
Posted by The Mound of Sound at 8:16 AM

does no one understand the concept of expotential

I assume, Steve, you meant to type "exponential" and to that question the answer is not many who wield the levers of power. They all seem to be working from the last IPCC figures which were understated and out of date long before the report was issued.

Well, it's rather too late to worry now, isn't it?


The "too late now" attitude is fairly common among those who even bother to learn of climate science developments any more. There are some scientists, such as Guy McPherson, who have openly embraced it.

What keeps me from throwing in that towel is that I have children. My neighbour is to become a great-grandmother twice this summer. A friend recently brought her daughter and newborn over to the island. It's for all the grandchildren and great grandchildren that climate science and our responses still matter.

There's virtually no chance we'll be able to return the climate to the idyllic conditions I experienced in the 60s. Much too far gone for that. We don't have much chance of averting a far more difficult world for the young who will be born over the balance of the century either. Yet there's a great deal we can do to ensure their lives are more perilous, hellish than need be and that includes carrying on as though any effort is pointless.

Not every country faces the same magnitude of challenges. Canada is one of just six that are expected to experience conditions that are somewhat tolerable (not everywhere, of course). We have much to do if we're to protect those chances and that entails both mitigation - slashing carbon emissions/rapid transition to alternative clean energy - and adaptation - overhauling, reinforcing and replacing our essential infrastructure that was never designed or constructed to meet the conditions of the 21st century.

I was away in Parksville last weekend and am still working my way through catching up on your blog Mound. You are a prolific writer.

Its the children we have to defend. My two grandchildren, yours, all of them. We have to defeat the fascism right now. We're out of time.

Hi Kim. I also was in Parksville last weekend and pretty much every other day for the past, probably two years. I simply don't get off the island much.

You're right. It is the children's and grandchildren's future that we have to defend. What we're doing today has a tangible, in some ways indelible, effect on how they'll live thirty, forty years from now.

We're all for self-righteous judgmental thinking provided we're allowed to ignore our own transgressions.