For All His Faults and Shortcomings, There is Still Much to Like in Justin Trudeau 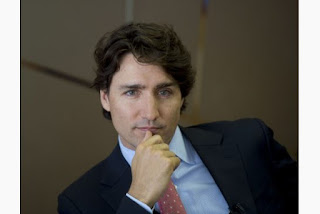 On major issues - Canada's surveillance apparatus, our uncritical support of Israel, this government's needless opposition to the BDS movement, the support of pipelines to expand bitumen exports, selling war wagons to a nation already committing war crimes while also a state sponsor of terrorism - I find little common ground with Justin Trudeau and his Liberal government.

Another achievement for which I am profoundly grateful is the extent to which Justin Trudeau has restored Canada's standing abroad. I read a lot of foreign media and am constantly surprised at the coverage - invariably favourable - young Trudeau attracts. In a world of Trump, Erdogan, Cameron, Netanyahu and Putin, the world looks at Trudeau and sees something fresh and positive - and friendly. They like what they see and, for Canada, after a decade of living with a world pariah, Shifty Steve, it's a wonderful change and we, all of us, should be grateful.

Apparently this video went viral in India. Pick it up at the 9:00 mark.

He offers a $20-billion stimulus package over 2 years. Half of Harper's $40-billion "Economic Action Plan"

His promise to run deficits is not exactly FDR considering all this money being borrowed is going into the offshore bank accounts of the rich.

He refuses to undo the Harper UI cuts, which were piled on top of the Chretien UI cuts, turning an insurance program into a tax on poor workers. He's bringing in more foreign temporary workers.

"the promise to introduce electoral reform"

Yeah right. Are the Liberals going to give up absolute power on 40% of the vote? Compete with the NDP for center-left votes, when strategic voting hands them those votes on a silver platter? Liberals in BC and ON promised electoral reform and in its place delivered designed-to-fail referendums.

But I have to say, if Trudeau were to put the interests of Canadians above his own personal and partisan ambitions, he would demonstrate a level of integrity in a politician not seen since his father was in power. He wouldn't be beholden to Red Tories any longer and could actually turn things around.

Isn't it pretty to think so?

I guess you didn't read the opening where I said that, on major issues, I don't think he's doing well. However I think you must be a New Dem and with all the endless burden of salving your wounds you simply cannot take a nuanced approach and accept even the good things Trudeau has accomplished. I'd suggest that's on you, not him.

Let's hold the praise until next election.
If Jr. introduces a transferable vote system (instead of a low threshold PR) which would virtually guarantee Libs majority forever, we will see his true colors. Black or white, it does not matter.
https://www.youtube.com/watch?v=GEYwVb-6TeE
A..non


I don't see any reason to wait to praise Trudeau for how he's improved Canada's image abroad, A..non. It won't prevent me from criticizing him for his lapses so what exactly is your problem?

I don't care about Mulcair or the NDP. I just want the 30 years of Tough Tory Times to come to an end. It has been a complete disaster. And Trudeau is not doing it. He's throwing the people a couple table scraps and the rich billions of dollars. The establishment is not kissing his ass because he's bringing in Real Change. They are fluffing him up because he's not.

As for undoing a number of low-cost idiotic nonsense Harper put in place: how does he deserve credit for that? What other opposition leader would have done less?

I think his revamping of the child tax credit deserves some credit. But this is in place of real daycare Liberals promised long ago and finally gave up on (for no good reason.) We also need pharmacare. But that's not going to happen.

Trudeau needs to do more than manage optics. We need an FDR New Deal. That's the only thing that will work. The Ontario Liberals tried the same nonsense Trudeau is doing. It never works. The hole just gets deeper and deeper.

I guess Trudeau shouldn't shoulder the blame for the electoral reform debacle. The Dippers are playing politics with this. They want PR or nothing. Not even Stephane Dion, who's a member of Fair Vote Canada, supports full PR.

So we have a situation where Trudeau is, perhaps, looking for some kind of compromise and all he's getting is attacked from the left, the right, the media and members of his own party. So he basically has to twist his own arm to get some kind of deal done, against his personal and partisan self-interest, which Dippers and Greens will use to attack him if he tries.

The electoral reform ideologues spread nonsense that ranked ballots would lead to permanent Liberal majorities. Of course, if center-left voters had the option of voting — #1 NDP, #2 Liberal — in support of daycare, reversing corporate tax cuts, etc. the NDP would be the sole benefactor (and Canadians.) But these idiots are too busy playing politics to pull their heads out of their asses and take a serious look at the issue.

So really Dippers, Greens and Fair Vote Canada are responsible for blowing up Canada's last shot at becoming a democracy. Trudeau has not yet unveiled a corrupt strategy. I hope he just drops it. Kicking the can down the road is better than driving the final nail in the coffin.

@ Anon 4:18 - you're missing the point of this post. This isn't a post-mortem on Trudeau's first six months in office. It's about what he's done for Canada's image abroad, how others perceive Canada post-Harper. Essentially your critique is off-topic.


@4:19 - I agree that the New Dems are playing politics with the PR option. I lean toward preferential balloting because I cannot support non-elected parliamentarians influencing, perhaps controlling the passage of our laws.

I've expressed these views to Fair Vote Canada and received the predictable response.

Yet, once again, this discussion - while always interesting - is off topic to this post.

* He is moving ahead with Shared Services Canada. There has been some criticism of SSC in the media, but this is the tip of the iceberg. It's a big expensive boondoggle, and a large centralization of power, which will make the PMO even more powerful.

* Too large a cabinet.

* Too many Ontario Provincial Liberal hangers-on. The Ontario Liberals are a progressive form of the Harper conservatives: centralized, secret, unaccountable, cliquish and stupid. Trudeau has given these people far too much prominence in his new government.

Trudeau has definitely improved Canada's image. I don't approve of a number of things he's done and in some are very concerned,but I'll give the devil his due.Let's face it the guy is a walking poster for charisma. The critics and the opposition try to make him out to be shallow because of his charisma, but that just is not true. You know he is in the public domestically or abroad because you just have to follow the crowds running to him. He is good looking, charismatic and confident (lots to be jealous of there) What he does have that really stands out though is an ability to connect with people and it is genuine. Young, old, rich, poor, powerful. The leaders at the G20, tough men/woman who are not easily swayed were enamored with him. He,like his father is at home in the world. I think it's refreshing to have a PM who is positively noticed when he travels abroad.

An improved image abroad doesn't help struggling Canadians pay the bills. On the major issues that directly affect the lives of Canadians, the Liberals are practically indistinguishable from the Conservatives.

The Liberals are about as serious about democratic reform as the Conservatives were about senate reform. All talk and no action. They will delay, make excuses and hope Canadians eventually forget about the issue.

@ Anon (both) - "an improved image abroad" is the limited scope of this post. That's what it's about. It's limited. You don't want to add your bit to that but you just want to slag Trudeau, presumably because you're still licking your wounds from your party's disgraceful fall from grace in the last election under the leadership of your unsuitable Mulcair. Oh, I'm sure that balanced budgets would have been just the key to helping Canadians put food on the table.

Ditto for your off topic slag on democratic reform. All you're giving is your hyper-partisan take and you know what that's worth.