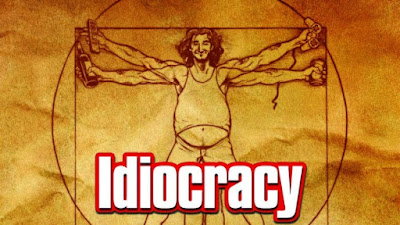 YeeHaw, shitkickers, tax cuts for everybody. Then, more tax cuts.

That's pretty much the formula used by Bobby Jindal during his 8-years as governor of the poorest, most screwed up state in America - Louisiana. It was already pretty messed up when Jindal moved into the governor's mansion and he wasted no time finishing the job. As a state today it's as derelict as a crack house.

Jindal, like certain dumb ass Conservative politicians north of the 49th, imagined he could bank on oil revenues. The Washington Post offers a cautionary tale of neoliberalism run amok:

Already, the state of Louisiana had gutted university spending and depleted its rainy-day funds. It had cut 30,000 employees and furloughed others. It had slashed the number of child services staffers, including those devoted to foster family recruitment, and young abuse victims for the first time were spending nights at government offices.

And then, the state’s new governor, John Bel Edwards (D), came on TV and said the worst was yet to come.

Edwards, in a prime-time address on Feb. 11, said he’d learned of “devastating facts” about the extent of the state’s budget shortfall and said that Louisiana was plunging into a “historic fiscal crisis.” Despite all the cuts of the previous years, the nation’s second-poorest state still needed nearly $3 billion — almost $650 per person — just to maintain its regular services over the next 16 months. Edwards gave the state’s lawmakers three weeks to figure out a solution, a period that expires March 9 with no clear answer in reach.

Louisiana stands at the brink of economic disaster. Without sharp and painful tax increases in the coming weeks, the government will cease to offer many of its vital services, including education opportunities and certain programs for the needy. A few universities will shut down and declare bankruptcy. Graduations will be canceled. Students will lose scholarships. Select hospitals will close. Patients will lose funding for treatment of disabilities. Some reports of child abuse will go uninvestigated.

An example of Jindal's sleight of hand were tax cuts he implemented using federal monies intended for the relief of Hurricane Katrina.

But as that money ran dry, Jindal said he would veto any bills that would push taxes back to where they had been. Instead, to plug budget gaps, Jindal relied not just on cuts but also on controversial, one-off fundraising methods. The state sold off assets, including parking lots and farmland. It cleaned out money from hundreds of trust funds — among them, one intended to build reefs for marine wildlife. It pieced together money from legal settlements.

Jindal was like a vampire when it came to the state budget. He bled an already poor state dry. Then, just as his term was ending came the collapse of oil prices. The Ponzi scheme ground to a halt.

It's by design. It's meant to destroy public government and all the services and infrastructure people actually rely, only to be replaced by private enterprise who'll have no accountability and can gouge and bleed people.

Neoliberalism is coming home to roost Mound. What the US global Neoliberals have been doing to other countries for years and doing to the US itself is now being revealed. This is just the tip of the iceberg. Many cities in the US with crumbling infrastructures, few jobs, the plundering of state treasuries and dire poverty will become failed states over the next few yrs.Imperial Neoliberal America will keep on expanding, sucking the American and world economies dry. Take note Canada!

@ CVSoG - the privatization scheme only works if there's enough meat left on the bones to feed the contractors. You've got to make that transition before your prey is destitute.

@ Pamela - this adds credence to Hedges' claims that the US is moving through a pre-revolutionary state. The prerequisite conditions common to most revolutions do indeed seem to be building with no signs of any mechanisms to relieve the pressures as they veer into the dangerous range. There's a reason a charismatic like Trump can attract such a following. Others like him have found success in exploiting these same conditions.

@ UU4077, thanks for the link. It's nice to see a bipartisan effort to even the state's keel but I have to wonder if it's too late.

OT but only a bit. There are two bits on Information Clearing House today 9 one by Pepe Escobar ) about the state behind the state and politicians are powerless to oppose it.

This idea is similar to the feeling I have about the briefing books the Trudeau government has been handed. Advisors have promoted the TPP . They have supported big trade deals , at whatever price , since NAFTA. Trump and Sanders supporters hate NAFTA, but our betters love it. The same problem exists with Canada's attitude towards Saudi Arabia. Fort Pearson has long been staffed with neo-con sympathisers and will not change their stance easily. Pipelines and bitumen are the same; the analysts working in the civil service were coopted so longer ago they can't see the trees for the oil spills.

Nowadays we don't charge in and fire all the residuals ; maybe we should send a hero to clean the stable. Unfortunately until then, the new government almost has to listen to their experienced and non-biased advisers.

"the privatization scheme only works if there's enough meat left on the bones to feed the contractors. You've got to make that transition before your prey is destitute. "

I never said it was logical, let alone sensible. Corporations aren't alive - they don't think, nor are they rational or compassionate.