In Other "Cattle Class" News 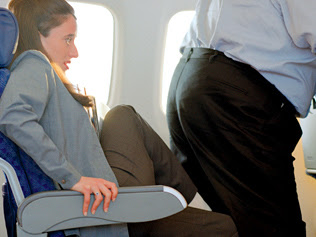 Can you imagine the joys of flying economy "cattle class" for 19 hours at a stretch? That flight doesn't exist - yet - but according to Aviation Week it could very soon.

The latest round of flights was kicked off by SIA [Singapore] late last year. The carrier announced its plans to resume nonstop services to New York, which it currently offers only on a one-stop basis through Frankfurt, and to Los Angeles, which is now linked to its network via a Tokyo stop. The new New York flight is to launch in 2018. At a distance of about 8,300 nm depending on routing, Singapore-New York was once the world’s longest commercial route, but given the plans of other airlines, it will not reconquer that title. The A340-500 flights were based on a westbound block time of roughly 19 hr.; given the higher cruise speed of the A350 the new flights are likely to be somewhat, but not much, shorter.

If the injury, i.e. thrombosis, doesn't get you, there's always the insult.

Airlines call it densification, but for passengers, squeezing additional rows of seats into what is already a confined space can conjure up images of packed sardine cans. As seating configurations become more dense, new concepts are emerging that aim to take the sting out of the trend.

I routinely flew 14 hr flights from North America to Asia. I was in pre flat bed biz class. I loved it. All I could drink for 14 hours and no interuptions, fascinating seatmates. I really think based upon my experience some hash brownies would do the trick for the cattle.