Hedges and The Rings of Sorrow 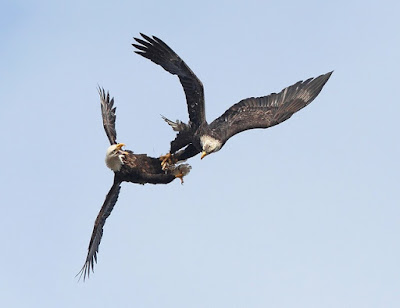 It's one of the most amazing things to see in nature. Two bald eagles lock talons and then spiral to Earth in free fall, releasing each other to fly away when just feet from the ground.  Those eagles are a metaphor for how Chris Hedges sees our struggle with ISIS.

“From violence only violence is born,” Primo Levi wrote, “following a pendular action that, as time goes by, rather than dying down, becomes more frenzied.”

The tit-for-tat game of killing will not end until exhaustion, until the culture of death breaks us emotionally and physically. We use our drones, warplanes, missiles and artillery to rip apart walls and ceilings, blow out windows and kill or wound those inside. Our enemies pack peroxide-based explosives in suitcases or suicide vests and walk into airport terminals, concert halls, cafes or subways and blow us up, often along with themselves. If they had our technology of death they would do it more efficiently. But they do not. Their tactics are cruder, but morally they are the same as us. T.E. Lawrence called this cycle of violence “the rings of sorrow.”

...Flags, patriotic songs, a deification of the warrior and sentimental drivel drown out reality. We communicate in empty clichés and mindless, patriotic absurdities. Mass culture is used to reinforce the lie that we are the true victims. It re-creates the past to conform to the national heroic myth. We alone are said to possess virtue and courage. We alone have the right to revenge. We are hypnotized into a communal somnolence, a state-induced blindness.

Those we fight, lacking our industrial machines of death, kill up close. But killing remotely does not make us less morally deformed.

...The merchants of death, the arms manufacturers, are among the few who profit. Most of the rest of us are caught in a cycle of violence that will not cease until we end the U.S. occupation of the Middle East, until we learn to speak in a language other than the primitive howl of war, death and annihilation. We will recover a humane language when we have had enough, when there are too many of our own dead for us to sustain the game. The victims will continue to be mostly innocents, trapped between killers that come from the same womb.

OT, but not by much.

Trudeau et al have had problems, accepting the advise in their briefing books. I could hear them hitting the desk all the way over here in Nova Scotia.

Dion now has an advisor who opposed selling arms to the Saudis. A bunch of manderins ( DM's included ) are on their way out.

It's a Herculean task, but the stables need cleaning and this is a start.

Jeebus. Rumley. If that's true, if the Liberals are cleaning out Ottawa's augean stables, there is room for hope.

On everything from energy to the environment, foreign and defence policy, inequality and democratic restoration, the Liberals need fresh advisors and that has to start with the DM ranks.

We just had what, for Canada, was nearly a decade of radical rightwing government. Those who rose to the top ranks of the Harper bureaucracy weren't free thinkers but accomplished sycophants. As for Dion himself, I think he's shown himself too malleable for any serious position.

The Liberals are NOT cleaning out the stables! I wish they were. They've just changed horses. Same old riders though.

@ PAm..
Agreed; I guess the Disaffected Lib will remain so!

This world is totally fake, a creation of humans imaginations, man we have very poor thoughts.